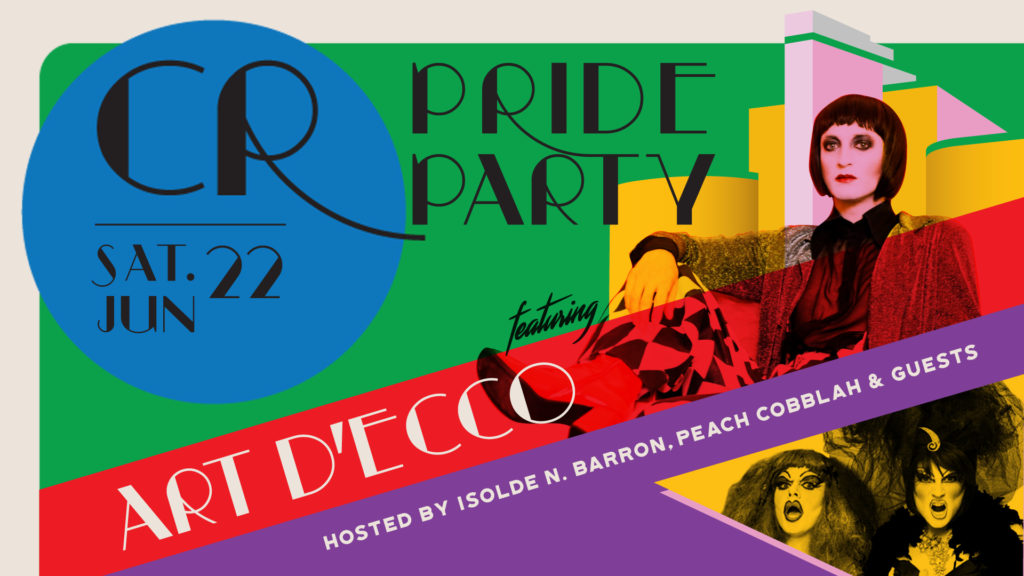 CR Pride returns for its fourth year with some of Vancouver’s finest drag talent to celebrate diversity and inclusion in our community! There are some old friends and new ones scheduled for this year’s Campbell River Pride Party, which is being held on June 22 at the Tidemark Theatre following CR Pride Festival in Spirit Square.

The Queen of East Van, Isolde N. Barron, alongside her wife, Peach Cobblah, return to host, but this year’s event will also feature the gender-bending glam rock of one of Victoria’s hottest new bands, Art d’Ecco.

Art d’Ecco is an enigma: an unapologetic, inclusive rock and roll mystic in a wig and lipstick.

“There’s more than a little David Bowie in both the sonic and fashion leanings of Art d’Ecco, a performer who fluidly crosses musical and gender lines, creating highly memorable tracks — and sporting an unforgettable look. Often labelled “neo glam,” the music boasts hints of everything from ’50s pop to psychedelics, from Velvet Underground-era art rock to Grimes-inspired electronics.” – CBC Music

Back again for another year are the ever-popular co-hosts Isolde N. Barron and Peach Cobblah with special guest and newcomer, Thanks Jem.

Originally from South Africa, Cameron (Isolde) is a Vancouver-based director, producer and drag queen. As The Queen of East Van, Isolde N. Barron, she hosts The Barron Gurl Show every week in Vancouver’s West End, as well as Drag 101, a monthly show at UBC’s Pit Pub. As the Queen Mother of the Cobalt, a space she helped transform into a vital queer hub, she hosted her own weekly show Apocalypstick for two years and was a monthly fixture at Queer Bash, East Van’s premiere queer dance party. She is currently the head judge ushering in new talent for the Mr/Miss Cobalt Competition, in its 7th year.

Special thanks to our CR Pride Party community sponsors:  Campbell River Mirror, 99.7 2day FM, Coast Discovery Inn, What’s On Digest, Save On Foods, BC Touring Council, Shadoe Intimates, Boston Pizza & Hermosa Lingerie.  CR Pride Party will be held at the Tidemark Theatre following the Campbell River Pride Festival on June 22, 2019 at 7:30pm.  Tickets are $17 for Youth and $22 for Adults (plus applicable taxes and fees) and can be purchased at the Box Office, Tuesday through Friday 12-4pm or online:  tidemarktheatre.com.