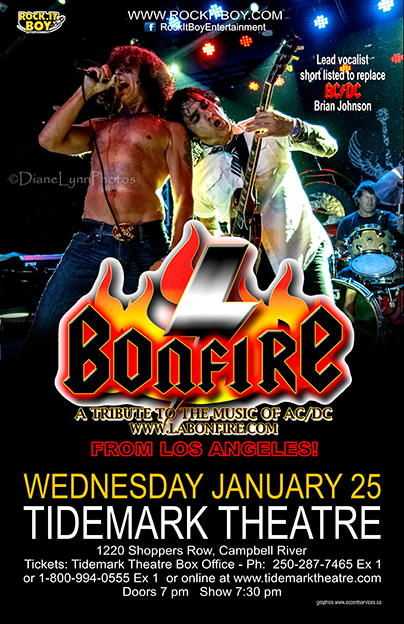 Bonfire – A Tribute to the Music of AC/DC

Bonfire is the quintessential tribute to the early music of AC/DC.  With hard-rocking, spot-on sound, they are selling out shows, rocking audiences out of their seats, all across the US, including San Diego’s prestigious House of Blues.  Now, they are bringing their off-the-hook extravaganza to Canada for a limited engagement tour.  Get ready for the perennial anthem “It’s a Long Way to the Top (If You Wanna Rock ‘n’ Roll)”, “Dirty Deeds Done Dirt Cheap”, “TNT”, “Let There Be Rock” and “Highway To Hell” along with the rest of the best of “Bon” Scott’s signature sound.  Their authentic look, sound, vocals and stage presence landed them a nomination for Best Tribute Band at the L.A. Music Awards (2012).

Bonfire delivers such authentic sound that the lead singer was shortlisted to replace AC/DC’s Brian Johnson!

Bonfire has performed several times on the Universal City Walk outside concert stage with Richard Blade (Radio, TV, and Film Personality) as the announcer and MC.  Richard exclaims, “An amazing tribute band!”  Jerry Greenberg (President of Atlantic Records 1974) worked with AC/DC during his years with Atlantic Records. Bonfire’s relationship with Mr. Jerry Greenberg began when he saw a performance, became a fan, and became involved with booking and promoting.  He states, “Bonfire is as close as you can get to early AC/DC.”  Bonfire opened for Foo Fighters at Paladinos in Los Angeles. Dave Grohl (Foo Fighters, Nirvana) made a point to mention Bonfire with much excitement between songs, “Did you guys see Bonfire !?!”  Jane Wiedlin (Guitarist for the Go Go’s), a fan and friend of the band, concludes, “Bonfire are not only the best AC/DC tribute band out there, they are my favorite tribute band, period! They will rock you till it hurts!”

For more information about bonfire – a tribute to the music of ac/dc visit: www.labonfire.com.