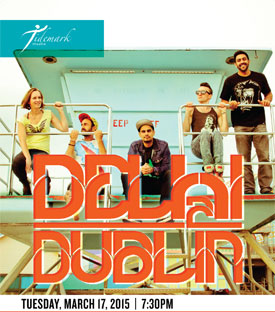 Delhi 2 Dublin’s songs and the band itself reflect the cultural diversity present in many major cities around the world. They challenge the definition of urban music and drag it to the intersection of Bhangra, Celtic, Dub Reggae and Electronica. They have created their own niche. Nayar states, “As a band, we’re not interested in making the same album over and over again. The music we’re inspired by changes almost weekly. At the moment, we’re loving Santigold, Major Lazer, Jazzy B, Burial, Buraka Som Sistema, Four Tet, Moombahton, and tons of underground stuff, which is quite different from the music we were listening to when we made our last album.”

The band has played several of the top festivals in Canada, the UK and the U.S. and, in 2011, expanded its horizons to include performances in the Pacific Rim and Europe. A new album and new international touring opportunities all signal that originality and evolution are all part of the Delhi 2 Dublin experience. Described by one magazine as the “United Nations of rock ‘n’ roll”, they have become one of Canada’s most buzzed-about bands. This year will only see them enhancing that reputation.