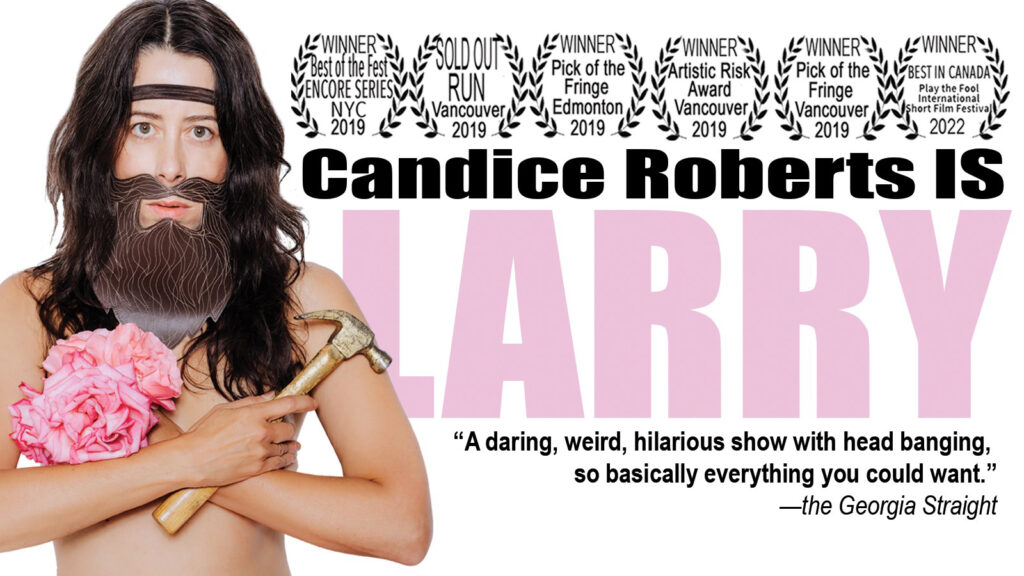 One dude’s journey into the feminine.

LARRY is a complex, fearless and gut-busting portrait of a small-town Canadian dude on a path of self-discovery. He wants to prove that he’s worthy of a good woman, that he can quit drinkin’ and even take up “medertation”.

Far deeper than it first appears, Larry’s journey into his own psyche uncovers more than he expected…

Candice Roberts uses her alter ego Larry to explore her experiences growing up as a female in Campbell River, B.C. in the 1980s. Culled from the male archetypes that surrounded her during her upbringing, Larry helps her investigate gender stereotypes—and makes people laugh.

“I don’t transcend in the theatre on a regular basis, but Larry opened me up and took me to a higher plane. Roberts’s clowning technique is first-rate — once she gets you laughing, she will not fucking let up.”– Colin Thomas – Simply the Best of 2019

“This superior, adult-oriented clowning comedy is far deeper than it first appears. It’s funny, weird and telling — with something important to say.”– Orlando Weekly

“Robert’s is a PRO Clown- she nails it in a way that had me GUT laughing for the entire performance.”– Riot Mueller, New Orleans Box Office

“This is a daring, weird, hilarious show with head banging, so basically everything you could want.” —the Georgia Straight

“GO SEE THIS F*CKING SHOW. I laughed so hard I cried, and then I cried some more—for entirely different reasons.“– #YEGARTSINREVIEW

“a highly skilled physical comedian, and, as you’ll see in the course of Larry, her bravery is virtually unlimited” – Liz Nichols https://12thnight.ca/