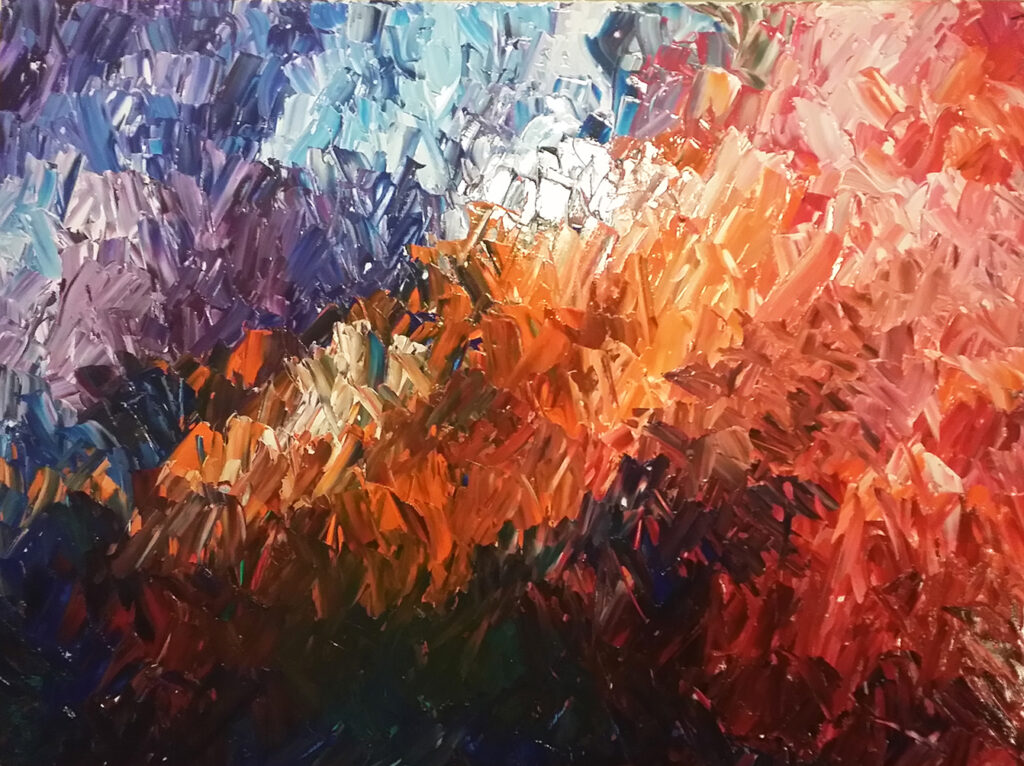 “Everyone needs a bit more colour in their life.”

That’s one of the many life philosophies of local visual artist, photographer, cajonier (pronounced “cah-hone-ee-ay” – a totally made-up word he invented to describe someone who makes Peruvian hand drums), musician and Campbell River Mirror journalist Mike Davies, whose first ever solo art show is coming up at the Tidemark Gallery this month.

Davies is excited – although admittedly a bit nervous – for his first gallery show, “but it’s also kind of about time, really,” he says with a laugh.

“I’ve been making art for as long as I can remember,” he says. “I actually began my university studies in the fine arts program way back when. I’ve just never had enough of my own to actually put on a show, because I would always be either painting them for other people or making them and then giving them away because I just didn’t have room to keep them.”

But over the last year or so he really got to work in his studio, and has now officially launched “Conversations in Colour,” a project he envisioned as a way to inject more visual vibrance into people’s lives.

“The world can be a pretty dreary place sometimes,” he says. “There’s too much despair, depression and negativity surrounding us, and I just thought, ‘the world needs more bright spots.’ So I started making some.”

Which makes the timing of his first show all the more appropriate.

“October is that time of year when the days get shorter, the sky gets gloomier and people just start getting kind of sluggish and low,” he says.

As a long-time advocate for strengthening mental health within ourselves, our community and our society in general, Davies says, he sees his current art project as another way to help with that – at least in some small way.

“Depression, in all its forms, is seriously debilitating for people and is a major cause of – or at least significant contributing factor in – some of the serious social problems we see around us every day, such as drug addiction, homelessness and domestic abuse. So I guess you could say the fight against it is something I take pretty seriously,” he says, which is why he has also decided to donate 20 per cent of the proceeds from the sales of his work during the show to the Canadian Mental Health Association.

After all, he says, he doesn’t make art to make money, he paints to try and make the world a bit better place to be.

Davies’ show, “A Conversation in Colour,” will run at the Tidemark Gallery from Oct. 22 through the end of November.