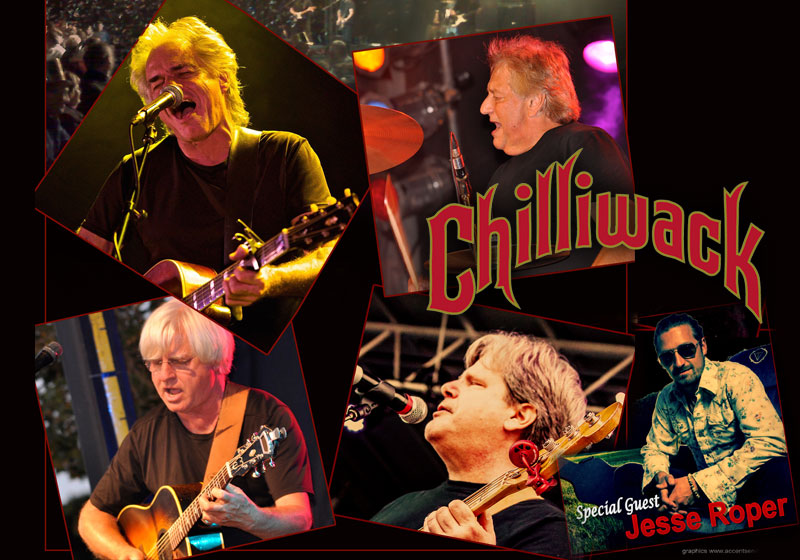 Vancouver stalwart Chilliwack has its roots as the house band of the Torch Cabaret back in ’66.  Evolving shifts in style and personnel resulted in the emergence of the band we know and love.  Through it all, the driving force remains Bill Henderson.  From the release of their first single “Looking at a Baby” which quickly rose to number three in Canada to the twenty minute major opus “What Love: Suite” – a huge cult classic – onward to “Raino”, “Lonesome Mary”, “Crazy Talk”, “Fly at Night”, “Baby Blue”, “California Girl”, “Communication Breakdown”, “My Girl (Gone Gone Gone)”, and “Whatcha Gonna Do” this iconic Canadian label has produced 31 hit singles, 16 of them Top 40.  Playing the airwaves now is Chilliwack’s newly recorded live CD, “There and Back” and stay tuned for the rocking commentary on life patenting issues “Patent On The Wind”.

Joining Chilliwack is Victoria BC’s magnetic rocker, Jesse Roper. With an explosive live show, the genuine quality and charisma of his versatile blues sound rooted in soul, rock and country is as approachable as his charm. Quickly gaining momentum, the wheels on Jesse’s faithful van keep turning, chronicling a year of extensive touring and success of becoming a major festival draw.

Since Jesse Roper’s sold out Red Bird album release show in January 2015, Jesse has had a surge of momentum propelling his career forward at a huge rate. This past summer, Jesse was a major festival draw directly supporting artists such as Keith Urban, Lee Brice and Tower of Power at festivals such as Sunfest and Rock the Shores, both with 20,000 person capacity. Earlier in the spring, after touring throughout BC and Alberta, Jesse played direct support for Colin James and Spirit of the West and headed to Kansas City for Folk Alliance International 2015. While also doing extremely well supporting older rock bands like ZZ Top, Steve Earle and Big Wreck. Jesse’s talent and accompany performance has the ability to cross genre’s, making him an unstoppable presence. Jesse Roper also successfully competed in White Rock’s Blues Society Challenge, winning the opportunity to compete in Memphis at the 2016 International Blues Competition.

The nostalgic may appreciate his throw-back vibe akin to Stevie Ray Vaughan and vintage Texas blues, however, Jesse Roper’s music remains current, the organic rawness of his vocals and guitar over shadowing any preconceived stereotypes made of blues musicians. His youthful energy captivates audiences while his knock out live performance blows them away.

Sponsored by the Campbell River Mirror, Coast Discovery Inn and What’s On Digest, the Tidemark Theatre and Gee Dan Productions proudly present, Chilliwack with special guest Jesse Roper at the Tidemark Theatre on February 22, 2019.   Tickets are $42.50 (plus applicable taxes & fees) and can be purchased at the Box Office Tuesday through Friday between 12pm and 4pm.  Tickets are also available online:  tidemarktheatre.com.