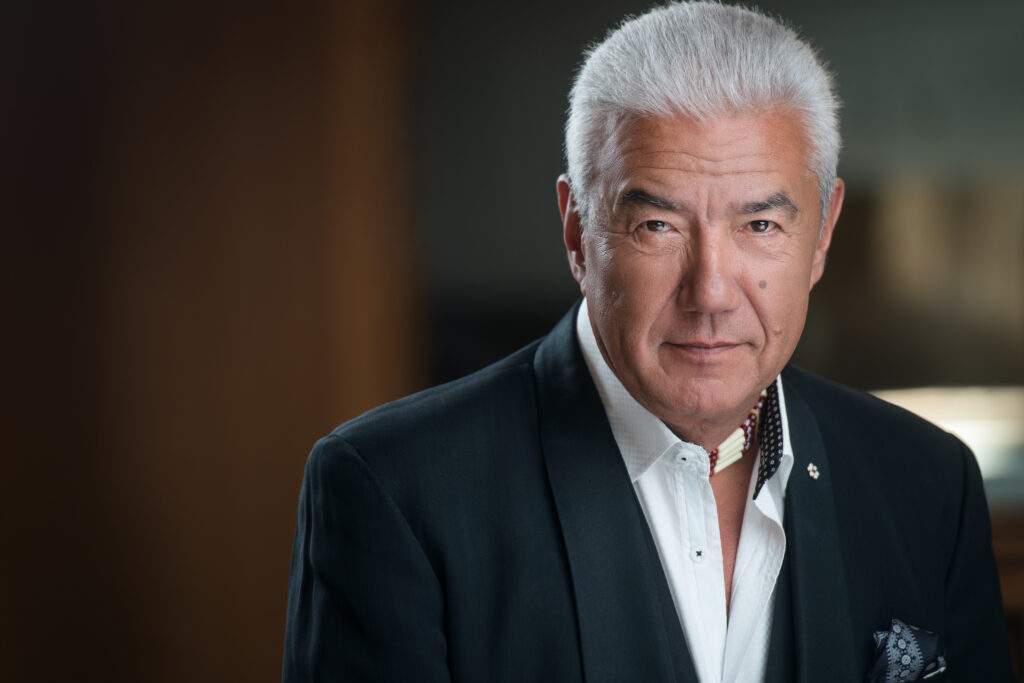 There are entertainment legends, and then there is Tom Jackson, a triple-threat actor, musician, and activist whose achievements in each discipline are downright head spinning. Jackson’s career is unparalleled, not to mention wildly acclaimed, abundantly decorated, and almost ridiculously interesting. Heck, Jackson could be a pub night trivia category all by himself.

Now, at an age when most are pulling back, the 70-year-old Calgary-based star is barreling towards the busiest and most glittering chapter in his towering 40-odd-year run at the forefront of contemporary film, TV, and music.

It’s impossible to regard Tom’s music separately from the other aspects of his remarkable career which include (but are not limited to) countless marquee TV roles on hit shows like North of 60, Shining Time Station, Star Trek: The Next Generation, and Law & Order. Guest roles in Season 4 of Outlander and Season 3 of Cardinal aired in early 2019 and Season 2 of Red Earth Uncovered follows. 2018 marked the release of The Essential Tom Jackson, a dazzling two disc, 21-track retrospective spotlighting his inimitable talent as a folk-pop singer/songwriter of the highest order and an artist intrinsically linked to the world around him, both the real and the ethereal.

There are also movies, lots of movies, including the dark comedy thriller Cold Pursuit opposite Liam Neeson. The Irish actor joins a long and very boldface list of onetime Tom Jackson colleagues — also including but not limited to — Eric Bana, Olivia Wilde, Kris Kristofferson, and Sissy Spacek (in 2012’s Deadfall), Bruce Greenwood (2005’s Mee-Shee: The Water Giant), and Bryan Brown (1999’s Grizzly Falls). Notably, many small- and big-screen parts have leveraged Tom’s Indigenous heritage for their dynamic characters; still others have employed his mellifluous tones for voiceovers.

Tom is understandably proud of all that. Yet it is his extensive charitable work — in particular, helming the long-running Huron Carole Christmas concert tours for Canadian food banks plus multiple other initiatives benefiting disaster relief — that is arguably his crowning achievement. With over $200 million in combined cash/in-kind value for food banks and disaster relief raised to date, it’s no wonder Tom, currently an Ambassador for the Red Cross, has been inducted as an Officer of the Order of Canada in 2000, and received the 2007 Juno Humanitarian Award, and the Governor General’s Performing Arts Award for Lifetime Artistic Achievement in 2014.

Multiple additional honours, including the 2007 Gemini Humanitarian Award, have been bestowed on him over the years. But those above-mentioned three, perhaps more than any others, have cemented his status as one of Canada’s most influential, distinguished, and revered sons.

Sponsored by the BC Touring Council, Campbell River Mirror and the What’s On Digest, the Tidemark Theatre presents, Tom Jackson: The Huron Carol on Saturday, December 5th at 7:30pm. Live stream tickets are $15 for Members, $20 Non Members (+ applicable taxes and fees), and can be purchased via virtual Box Office, Tuesday through Thursday between 12 p.m. and 4 p.m. Tickets are also available online: tidemarktheatre.com OR 287-PINK!