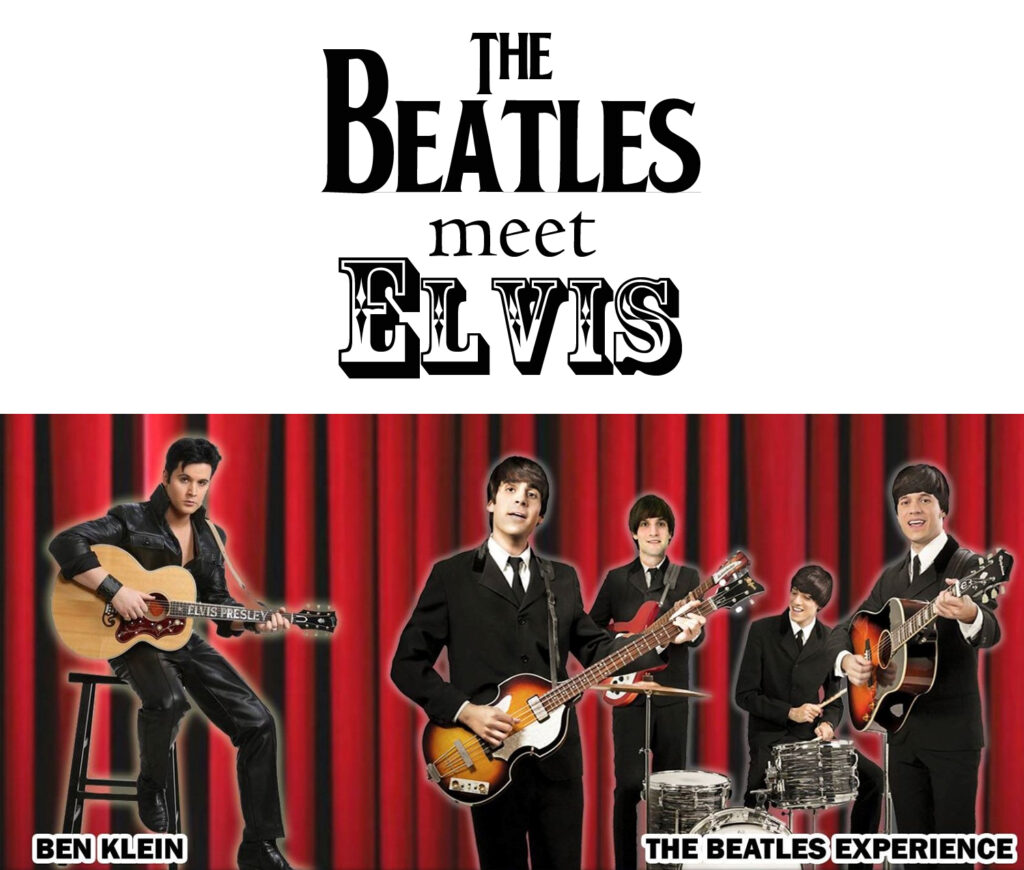 Welcome to a night of great performances by Ben Klein and The Beatles Experience.

As the curtains open, Ben Klein will take you back to a time when music was exploding with energy, bringing you all your favorite Elvis songs.

Following intermission, Ben Klein will be joined by The Beatles Experience. On the evening of August 27, 1965, Elvis Presley and The Beatles, the music world’s biggest stars, met for the first and only time. When the Fab Four went to see the King of Rock ‘n’ Roll at his Beverly Hills mansion, on a night off from their US tour, it gave way to an impromptu jam session. But there are no recordings or photographs of the event. UNTIL NOW…

The Beatles Experience will close out the night featuring your favorite Beatles hits.

Ben Klein has won eight (one of them Gospel) 1st place titles and seven First Runner up place wins. He performed in the exclusive tribute show, “Good Rockin” Elvis Day Festival in Memphis, the first ever presented by Elvis Presley Enterprises and Elvis International Magazine.

In 2007 he became a member of the elite E.P.E. Top Ten Ultimate Elvis Tribute Artists in the World.  He finished in 5th place. In 2008, he moved up to 4th place. In 2011 he won first runner up in the Ultimate Elvis Contest sponsored by Legends in Concert and Elvis Presley Enterprises.

He joined E.P.E.’S Ultimate Elvis tour in January 2012, visiting 28 cities, and again in 2013. This time, he traveled to over 60 Cities, in 117 Days and performed 117 shows. He has also worked for Legends in Concert on the Norwegian EPIC Cruise Ship twice and in multiple casino locations.

The Beatles Experience was born in 2011 in Buenos Aires, Argentina. In 2014 they won the “battle of bands” in the 14th Latin America Beatleweek, organized by The Cavern Club Buenos Aires. This prestigious contest gathers the best South American Beatle tributes every year. Two of the band’s members have been awarded “Best Guitar player” for three consecutive years (2012, 2013, 2014) and “Best Drummer” in 2013, respectively.

Even though The Beatles Experience is very respectful of the Beatles roots in each song they play, its members clearly put their stamp on them. This passion is what makes them sound more original and fresh when they play live, taking you on a trip down memory lane with all your favorite Beatles tunes.