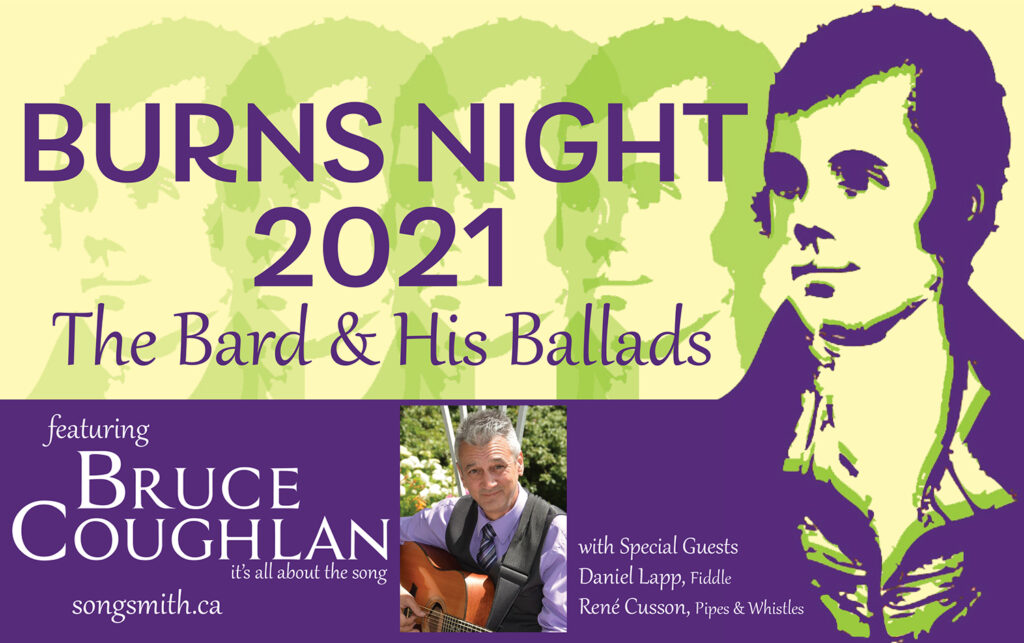 Join songsmith Bruce Coughlan with special guests Daniel Lapp, fiddle & piano, and René Cusson, pipes & whistles, in a virtual Burns Night Musical Celebration, An Address to Robbie Burns.   The stage is set for an intimate portrait of Burns in his own time. The story of his dramatic life and tragic death, woven through the lines of his own songs.  It’s a tale of whisky and haggis, and of how Robbie Burns would emerge as a symbol of the Scots identity, and a champion for the common man, who’s genius continues to shine 225 years later.

WHY ROBBIE?  “I have always admired the works of Robbie Burns and have taken pains to decode much of the broad Scots vernacular in which it’s so brilliantly framed.  I have performed dozens of Burns dinners, led the tartan throngs singing Auld Lang Syne, Ae Fond Kiss & The Star o’ Rabbie Burns, and have on rare occasions, amidst all the pipes, pomp & circumstance, been permitted to address the hallowed haggis!   Still, my mind begged for context. Who was Robbie Burns in his own time?  A man of modest means, possessed of “mither wit and native fire” Burns’ words themselves reveal much about the man, his humility, humanity, passion, compassion, humour & insight.” – Bruce

BRUCE COUGHLAN is a career songwriter and recording artist residing in British Columbia, Bruce Coughlan is a vocalist, multi instrumentalist and composer with over four decades of professional experience. An expressive singer and rock-solid guitarist (flat-pick & fingerstyle), Bruce sports an extensive repertoire spanning an array of Roots music genres including Celtic, Bluegrass, Americana, Folk, Maritime, Blues & more. He has performed in eight provinces and one territory, 38 states and has toured the United Kingdom on a dozen occasions. Since recording his first LP in 1984, he’s recorded 14 albums of his original and adapted traditional music across a broad range of the Roots Music genre. Bruce might be best recognized for his historically based ballads, written on Pacific Canadian themes. He has been the composer and lead singer of Tiller’s Folly for over two decades.

The Venue: Tidemark Theatre: When COVID hit and all venues had to close, the Tidemark Theatre in Campbell River on beautiful Vancouver Island was one of the first venues to pivot and purchase state of the art streaming equipment with five cameras, and create a stage for streaming with the addition of lighting and sound technicians. They have built a situation where the artists can perform to ensure the best quality digital concert experience for their patrons. To date they have produced over 40 streaming concerts, festivals and events and we are thrilled to be sharing this Robbie Burns Celebration from the Tidemark Theatre.