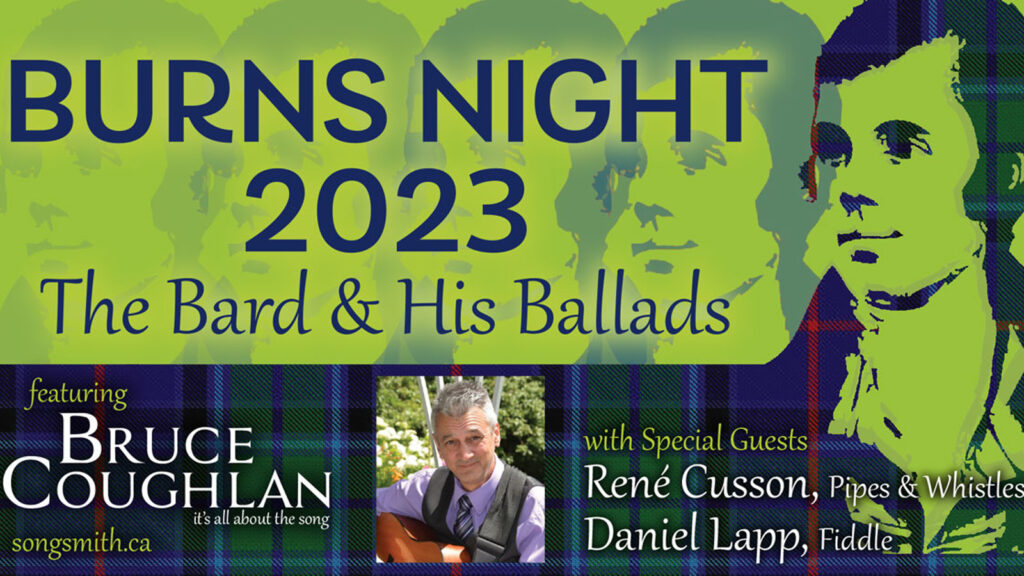 Since the first Burns Dinner in 1801, people have gathered to pay homage to this great Scottish Bard.

Robbie Burns (1759-1796) in his own time was a man of modest means, spending most of his life an impoverished tenant farmer. But Burns possessed “mither wit and native fire” and his own words reveal much about the man, his humility, humanity, passion, compassion, humour & insight.

“As a songwriter myself, I am especially drawn to his craft. The songs Burns either wrote or adapted have survived the test of time because of the quality of writing and how simply and eloquently they convey immensely powerful messages.” – Bruce Coughlan

Programme selections include the Bard’s greatest hits: Westlin Winds, Auld Lang Syne, Ae Fond Kiss, A Man’s A Man and of course, Address to a Haggis!

Bruce Coughlan is a Canadian songwriter and recording artist residing in British Columbia. He sports an extensive repertoire spanning an array of musical genres including Celtic, Bluegrass, Americana, Folk, Maritime, Blues & more. Bruce has performed across Canada and in 38 USA states and has toured the United Kingdom on a dozen occasions. Since recording his first LP in 1984, he has recorded 14 albums of his original and adapted traditional music across a broad range of the roots music genre. Bruce might be best recognised for his historically based ballads, written on Pacific Canadian themes. He has been the composer and lead singer of Tiller’s Folly for over two decades.

René Cusson is renowned throughout the piping world as a musician, competitive piper, performer, teacher, adjudicator and composer. His music is performed all over the Celtic world and has been widely recorded at home and abroad. Added to his playing of various bagpipes is whistle playing and singing. He is presently completing a book of his compositions to be launched in Glasgow soon.