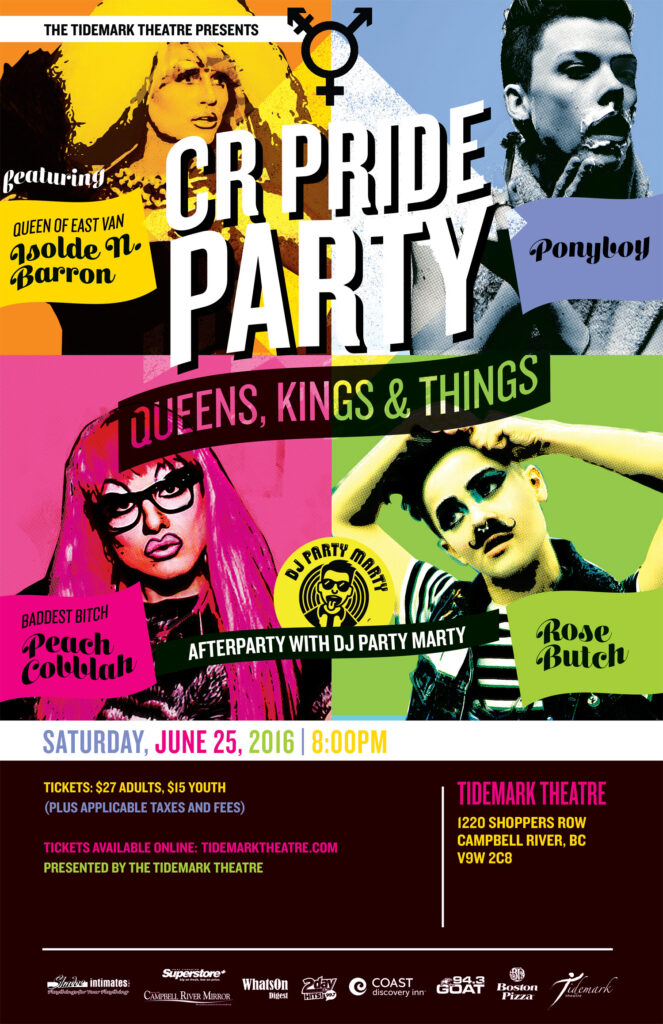 The Queen of East Van, Isolde N. Barron, is a multifaceted theatre artist. Past Entertainer of the Year, her fundraising endeavours at High School Confidential, For the Girls and Queer Bash earned her a “Drag Queen of the Year” nomination for Xtra’s Hero Awards. She has co-created and performed in Tucked & Plucked: Vancouver’s drag HerStory Live on stage! (as well as an edition of the same show commissioned for Surrey’s drag history) and 20 Minute Drag School. She recently appeared with her wife Peach Cobblah on CBC Radio Ideas documentary about drag in Vancouver by Willow Yamauchi. She was also the Associate Director on the Vancouver Playhouse’s final production of La Cage aux Folles. After hosting Apocalypstick: East Van’s Drag show every Sunday for two years at the Cobalt she now has a new weekly show Wednesdays with local icon Carlotta Gurl, called The Barron Gurl Show at The Junction. Check out zeezeetheatre.ca for more.

Peach Cobblah is known as the Baddest Bitch of Vancouver. With her wife Isolde N. Barron she co-created Tucked & Plucked: Drag Herstory Live Onstage which has appeared extensively in Vancouver and Surrey and will premiere in Victoria next year. Peach created and hosts Shame Spiral, a devilishly regretful weekly drag show at 1181 in Vancouver’s West end which was recently acknowledged as Best Drag Show by The Westender’s Best of Vancouver. She also produces a number of queer events at The Cobalt including HUSTLA, the city’s only monthly queer hip hop event, The Gay Agenda: Glitter & Skin, a monthly party celebrating all forms of masculinity, and the annual Mr/Miss Cobalt Drag Competition. She appeared as Hanna the Dominatrix in The Vancouver Playhouse’s final production, La Cage Aux Folles. As a boy Peach is known as award-winning playwright Dave Deveau whose plays for young audiences have been touring Canada and the US for the past three years. www.peachcobblah.com

Paige “Ponyboy” Frewer is a gender fluid drag king, and the producer-host of Man Up, a monthly queer cabaret and dance party at the Cobalt in Vancouver. In 2013, they launched Amateur Hour, an open-call, all-levels queer variety show that provides stage time, mentorship opportunities, and sometimes paid gigs, to aspiring gender performers. After 8 years of performing, Ponyboy has become increasingly passionate about event production, connecting queer performers to new audiences, and bringing people together in community space. Ponyboy has performed in Portland, San Francisco, and New York City.

Rose Butch is a non-binary drag thing. They are a regular performer at East Van’s monthly gender cabaret, Man Up, and the 2015 winner of the Mr/Miss Cobalt competition. Rose’s gender dynamic, theatrically-inspired drag has been featured in venues across Vancouver, as well as in the pages of Vancouver’s SAD Mag and Montreal’s Maisonneuve Magazine.

Ticket includes admission to the show and after-party with DJ Party Marty.