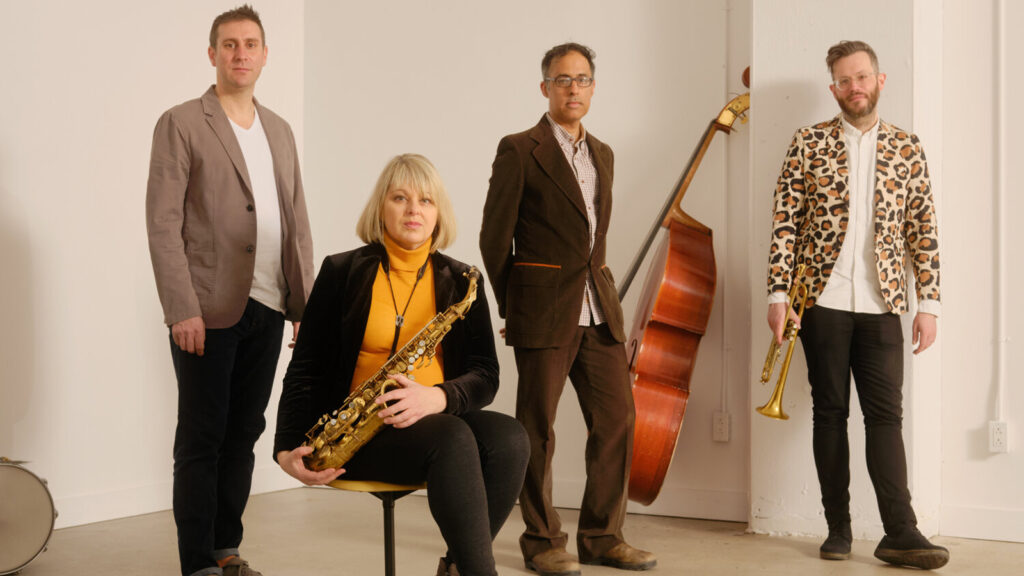 “A quartet that has developed its own interactive reality. There is much free-wheeling exuberance here, and the music swings like mad. The two horns work beautifully together and solos are wonderful. The goal of freedom of expression for each member as shown in (Ornette) Coleman’s ground-breaking music is fully evident.” – Keith Black, Winnipeg Free Press

CODE Quartet is an outstanding jazz collective based out of Montreal made up of Christine Jensen on saxophones, Adrian Vedady on acoustic bass, Lex French on trumpet, and Jim Doxas on drums.

Originally from Nanaimo, Christine Jensen has become a mainstay in the Montreal and Canadian jazz scene known for her work with small ensembles and jazz orchestras as “one of Canada’s most compelling composers” (Globe and Mail). Vedady, French and Doxas are all in demand session players and leaders of their own ensembles. They have numerous Juno Awards and Grammy nominations between them and have performed with a who’s who of jazz from Arturo Sandoval, Diana Krall and Kurt Elling, to Oliver Jones, Dave Douglas and Laila Biali.

The group came together four years ago to build on the freedom of expression of a chording instrument-free quartet pioneered by Ornette Coleman’s seminal group of the 1950s, with two horns interacting with acoustic bass and drums. Each voice within the collective is given equal weight, blurring the boundaries between lead and supporting voices, between frontline instruments and the rhythm section. The group have spent the past four years sculpting their original compositions as a team, leading them to some exciting performance opportunities. They have performed residencies at jazz clubs in Montreal as well as The Wellington Jazz festival in New Zealand. The group’s principal focus is to present original compositions, orchestrated exclusively for this particular ensemble, weighing heavily on their improvisatory reactions to the written material. The result is their debut album Genealogy, which was released this past April on Justin Time Records.