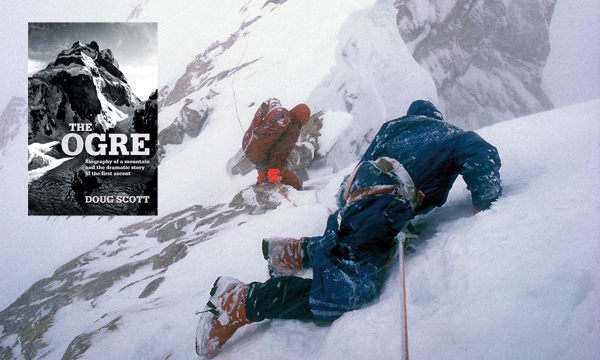 ONE OF THE MOST DRAMATIC STORIES OF MOUNTAIN SURVIVAL EVER

Famous British Himalayan climber and photographer, Doug Scott, (known in the international climbing community as “The Great Survivor”), will visit the BC West Coast this fall.

Introduced by his old friend, local veteran mountaineer Rob Wood, Doug will give a series of public illustrated presentations of one of the grandest epic survival stories of all time.

Doug Scott and Chris Bonington, icons of British mountaineering, made the first ascent of The Ogre (7285m) in the Karakoram in 1977.  Their climb extended the boundaries of what had been achieved before at that altitude – but it was the subsequent descent from the summit in the dark, turning a catalogue of disasters into an epic.  The Ogre wasn’t climbed again for twenty four years.

The story of this expedition has since entered mountaineering folklore as one of the most dramatic stories of hard climbing, team work and survival against all odds recounted in Doug’s famously laconic and humorous style. The talk has been refreshed with the aid of newly discovered photographs and material from diaries from other members of the team – Chris Bonington, Nick Estcourt and Clive Rowland – plus cine film and audio tapes recently discovered in an attic and made by the late Mo Anthoine on the expedition.

In 1995 Doug founded the UK-registered charity Community Action Nepal to help the mountain people of Nepal who had helped him achieve his climbs. CAN www.canepal.org.uk is largely supported by Doug’s lectures. Most of CAN’s projects in Nepal, including rural health posts, schools, hostels, demonstration homes and porter rescue shelters, were damaged if not completely destroyed by the devastating earthquakes of 2015 – millions of people are still homeless.

All proceeds (after expenses) from this tour will support CAN’s post-earthquake reconstruction program. Doug will provide a brief update on the progress that’s been made and future plans.

After the Doug’s main presentation there will be an opportunity for questions and answers and sales of signed copies of Doug’s recently published autobiography Up and About and his new book The Ogre – Biography of a mountain and the dramatic story of the first ascent (Boardman Tasker Award nominee) and Rob’s books, At Home in Nature and Towards the unknown mountains.

Doug Scott is an English mountaineer noted for the first ascent of the south-west face of Mount Everest. Over the years he has been on 40 expeditions to the high mountains of Asia, during which he made some 30 first ascents. He is also a recipient of the esteemed Piolet d’Or Lifetime Achievement Award. You may be familiar with his epic “crawl down the Ogre (Baintha Brakk) after suffering two broken legs. He has written a number of books, gives lectures around the world and started a charity called Community Action Nepal.

Rob Wood has been a professional architect, pioneering mountaineer, organizer of ocean-to-alpine expeditions, instructor of wilderness self- reliance at Strathcona Park Lodge and a founding member of the Friends of Strathcona Park, a protest group that helped stop logging and mining in the park. He built and continues to live in an off-the-grid homestead on Maurelle Island. His book At Home in Nature is a gentle and philosophical memoir that focuses on living a life deeply rooted in the natural world, where citizens are connected to the planet and individuals work together to help, enhance and make the world a better — and sustainable — place.