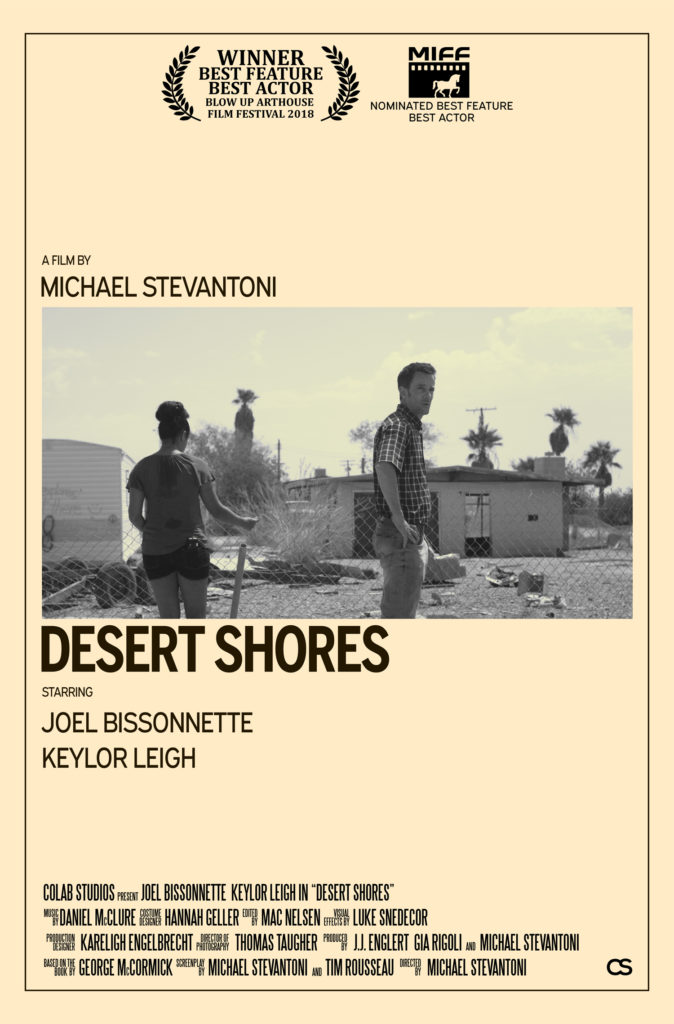 Based on the award-winning book by George McCormick, Brian (Joel Bissonnette), a supervisor at a trucking firm, receives a promotion that would bring him to Washington D.C.. It’s an opportunity for higher pay, an escape from his idle desert town. For his wife Ramona (Keylor Leigh), however, it means the abandonment of her aging father, who dotes upon her seven-year-old. Furthermore, news is breaking that an anonymous sniper is terrorizing D.C., picking off innocent people.

Desperate, Brian takes Ramona to the Salton Sea, a faded resort destination where they once honeymooned, in an attempt to rekindle their chemistry, and if all goes well, to persuade her to move. When Ramona discovers Brian’s true intentions, she questions his commitment to their family. In the face of a country losing its way, Brian is forced to reevaluate what it means to be a husband, a father, and a provider; in essence, a good man.

Michael Stevantoni was born and raised in Campbell River, British Columbia. At an early age, he started making films and by age 14, he was working with professional actors and garnering awards at international film festivals. He then moved to Southern California to study film production at Chapman University’s Dodge College. Here, Michael earned recognition for his short films, including Feral Feelin’ Blues and The Banality.

While still attending school, Michael wrote, directed, and co-produced his first feature film Desert Shores, an adaptation of George McCormick’s short story collection Salton Sea. The film premiered at the Blow-Up Chicago International Arthouse Film Festival in Chicago. After graduating, Michael moved to Los Angeles where he directs music videos and is developing his next feature.

“The first year I moved to Southern California from Canada, I found the Salton Sea while exploring the surrounding desert and investigating mysterious vacant buildings I saw from the highway. In its heyday, the Salton Sea spawned several boom-towns, but after a series of ecological disasters, the resorts, restaurants and yacht clubs were abandoned and remain in decay. What can still be found at the Salton Sea are forgotten artifacts of another time, immune to progress but shrouded in the mysticism of nostalgia. I saw this strange landscape as the perfect way to express the anxieties that America is experiencing today.

“Like the characters’ failing marriage, the Salton Sea is a once glamorous resort destination now fallen into decay and memory of better times. Brian wonders what it means to be a good man, just as the country struggles to define itself and is more nostalgic of an imagined past than it is sure of its future.”