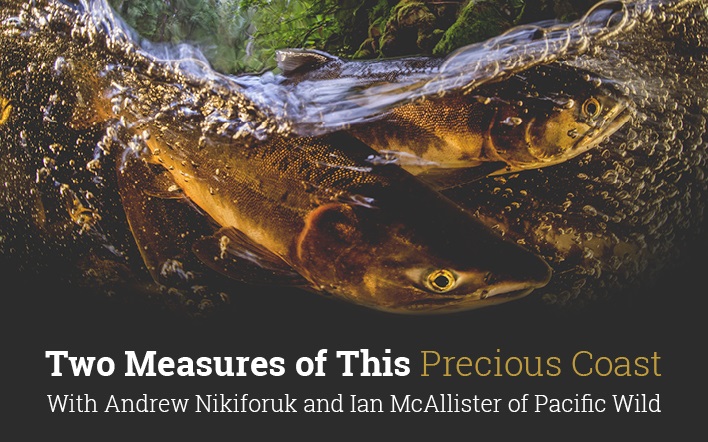 Two impassioned voices for environmental conservation will be joining together for an evening at the Tidemark Theatre in honour of early environmental activist and Campbell Riverite Roderick Haig-Brown. This is the seventh in the Annual Haig-Brown Memorial Lecture series, which has been a joint effort of the Campbell River Arts Council, the Museum at Campbell River, and the Haig-Brown Institute. This year’s event is called “Two Measures of this Precious Coast”. Andrew Nikiforuk will be presenting the lecture, “Why Haig-Brown Matters More than Ever”, and Ian McAllister of Pacific Wild will be opening with a talk called “The Ocean Never Sleeps”.

For more than three decades Andrew Nikiforuk has written about energy, economics and the West for a variety of Canadian publications including the Walrus, Maclean’s, Canadian Business, The Globe and Mail’s Report on Business, Chatelaine, Georgia Straight, Equinox and Harrowsmith. Nikiforuk’s journalism has won seven National Magazine Awards since 1989 and top honours for investigative writing from the Association of Canadian Journalists. This former Haig-Brown Writer-in-Residence will offer insight into why Roderick Haig-Brown remains Canada’s most under-appreciated conservationist. On almost every issue including salmon protection, dam building, climate change and community resilience, Haig-Brown forged a remarkable and inspiring moral vision for ordinary people. In this lively talk Nikiforuk will explain why Haig-Brown’s legacy matters more than ever.

Canada may have the longest coast-line of any nation but it has set aside the least for marine protection. Famed photographer and conservationist Ian McAllister presents a visual tour on the state of fin whales, herring and salmon in the Great Bear Rainforest. He asks, “What would Haig-Brown do today?” McAllister is an award-winning photographer and author of six books, and his images have appeared in publications around the world. He is a member of the International League of Conservation Photographers and a recipient of the North America Nature Photography Association’s Vision Award and the Rainforest Action Network’s Rainforest Hero award. He and his wife, Karen, were named by Time magazine amongst “Leaders of the 21st Century” for their efforts to protect British Columbia’s endangered rainforest. He lives with his family on an island in the heart of the Great Bear Rainforest.