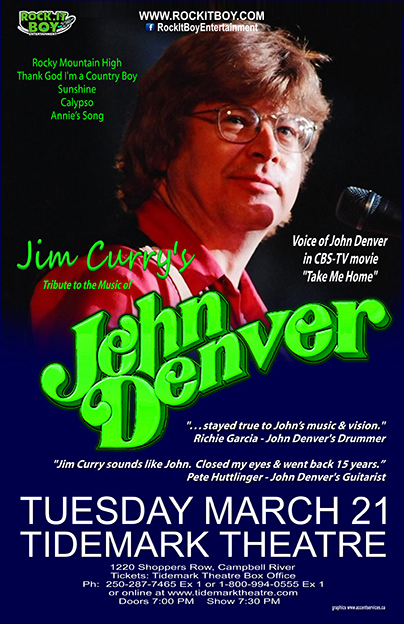 Jim Curry’s Tribute to the Music of John Denver

The music of the late John Denver is like an old friend, outlasting trends and standing the test of time.  Join acclaimed performer Jim Curry for this tribute to the music of one of the most beloved singer/songwriters ever to grace the stage.  Jim’s uncanny ability to mirror John’s voice combined with his clean-cut look takes you back to the time when “Take me Home Country Roads”, “Rocky Mountain High”, “Sunshine”, “Calypso” and “Annie’s Song” topped the charts, and his popular music had the heartfelt message of caring for the earth and caring for each other.  Jim believes that John Denver’s words still ring true in these difficult times of war and environmental crisis.

Tribute artist Jim Curry, whose voice was heard in the CBS-TV movie Take Me Home: The John Denver Story, has performed Denver’s music in sold out shows throughout the US and Canada as well as out to sea and has emerged as today’s top performer of Denver’s vast legacy of multi-platinum hits.  He’s not your usual “Vegas style” impersonator. In fact, he is not an impersonator at all. Jim sings, in his own natural voice, a tribute to the music in a way that has to be seen and heard to understand the pure honesty of his amazing performance.  In October 2007, the 10th anniversary of John’s passing, Jim brought a landmark concert to the stage in Aspen, Colorado. It included many of John Denver’s former band members, some of them for the first time in a tribute show.

Curry’s philosophy is summed up in the words, “These songs blend the images of our natural earth with a love for each other as people. The care you give to someone you love is the best care. Making that connection to our earth and to each other is the goal.”

For more about JIM CURRY’S TRIBUTE TO THE MUSIC OF JOHN DENVER visit www.jimcurrymusic.com.