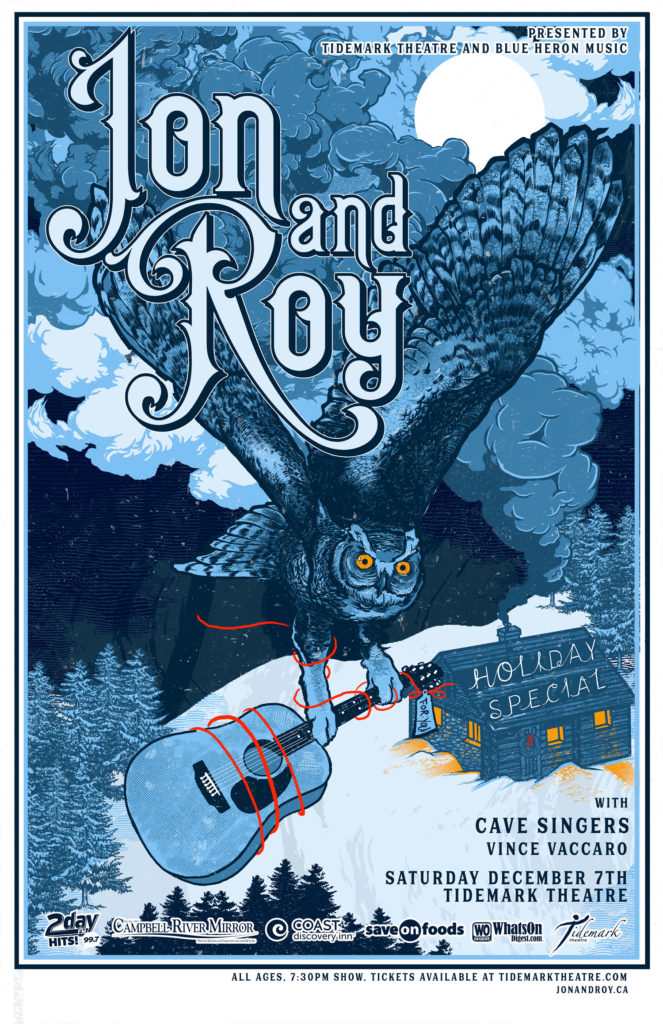 Jon and Roy are bringing their annual Holiday Special to the Tidemark Theatre for one night of festivities.  A festive tradition in Victoria now in its 11th year, the show featuring multiple acts has expanded in recent years, making it’s way to other parts of the island. This revue type show offers several acts doing short sets followed by an intermission and headline set by Jon and Roy. Joining Jon and Roy are Seattle folk/rock group The Cave Singers and Vince Vacarro.

Given the rising popularity of meditative, folky indie acts in the early 2000s, forming a twangy, rootsy folk trio was probably the least surprising move Derek Fudesco could have made. The former bassist and founding member of the successful indie rock group Pretty Girls Make Graves picked up an acoustic guitar and formed the Cave Singers following PGMG’s demise in January 2007, teaming up with vocalist Pete Quirk and drummer Marty Lund. The Cave Singers released two albums on both Matador and Jagjaguwar Records. Following these releases, The Cave Singers began work on their fifth album. Rather than working with a record company, they opted to coordinate the project themselves and financed the recording through a crowdfunding campaign. The campaign raised 116 percent of the group’s goal, and the album, Banshee, was released in February 2016.

Vince Vaccaro is a Canadian singer-songwriter, guitarist and record producer. He has performed largely as a solo artist, appearing both solo acoustic, and backed up by a five to eight piece band. His musical influences include Bruce Springsteen, Ben Harper, Eddie Vedder, and Adam Granduciel of the War on Drugs. Vaccaro has played shows in Canada, Australia, and the US, sharing stages with bands such as Mumford & Sons, Temper Trap, Awol Nation, Matt Mays, Jay Malinowski & the Deadcoast, Sam Roberts, City & Colour and Bedouin Soundclash, amongst many others. He was born in Montreal, Quebec, and grew up in Victoria, British Columbia.