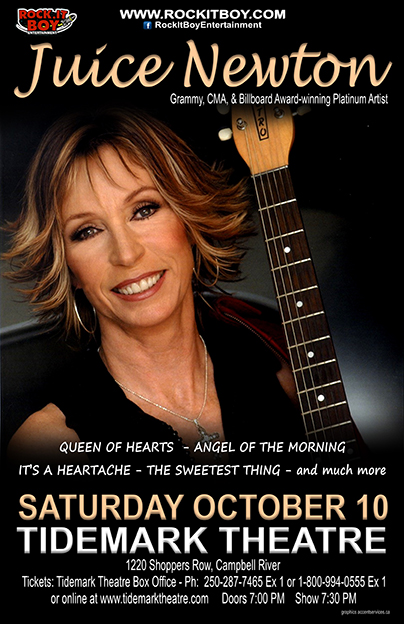 Judith Kay “Juice” Newton is a Grammy, CMA and Billboard award-winning artist with multiple platinum and gold albums, ten million records sold and 15 Top 10 Hits under her belt.  Among these are the enormous hits “Angel of the Morning”, “Queen of Hearts”, the #1 country smash “The Sweetest Thing (I’ve Ever Known)”, “It’s a Heartache”, “Love’s Been a Little Bit Hard on Me”, “Break It to Me Gently”, “Heart of the Night”, “Tell Her No”, “Dirty Looks”, “Stranger at My Door”, “A Little Love” and “Restless Heart”.  Her latest outing Duets: Friends & Memories (2000) has produced the wildly popular “Take It to the Limit” and “Without You”.

The emotional force of NEWTON’S vocal delivery coupled with her soaring notes and silken phrasing has made her one of the most evocative and enduring performers of our time.  Inspired by the Byrds, Bob Dylan and folk artists like Tom Rush and Ian & Sylvia Tyson; from her first group Silver Spur to her hugely successful solo career, Juice has earned a lot of respect from colleagues and industry insiders.

The album Juice (1981) went platinum and became an international monster.  The Track “The Sweetest Thing” spent 18 weeks in the Top 40, and Juice Newton earned two Grammy nominations for Best Female Vocalist.  Her album Quiet Lies (1982) was certified gold within months and spawned multiple hits including “Break It to Me Gently” which landed her a Grammy Award for Best Female Country Vocal Performance (1983) in competition with Dolly Parton, Emmylou Harris and Rosanne Cash.  She added an Academy of Country Music Award for New Female Vocalist of the Year (1982), back-to-back Billboard Female Album Artist of the Year honors and Australian Music Media’s #1 International Country Artist win to her trophy cabinet.