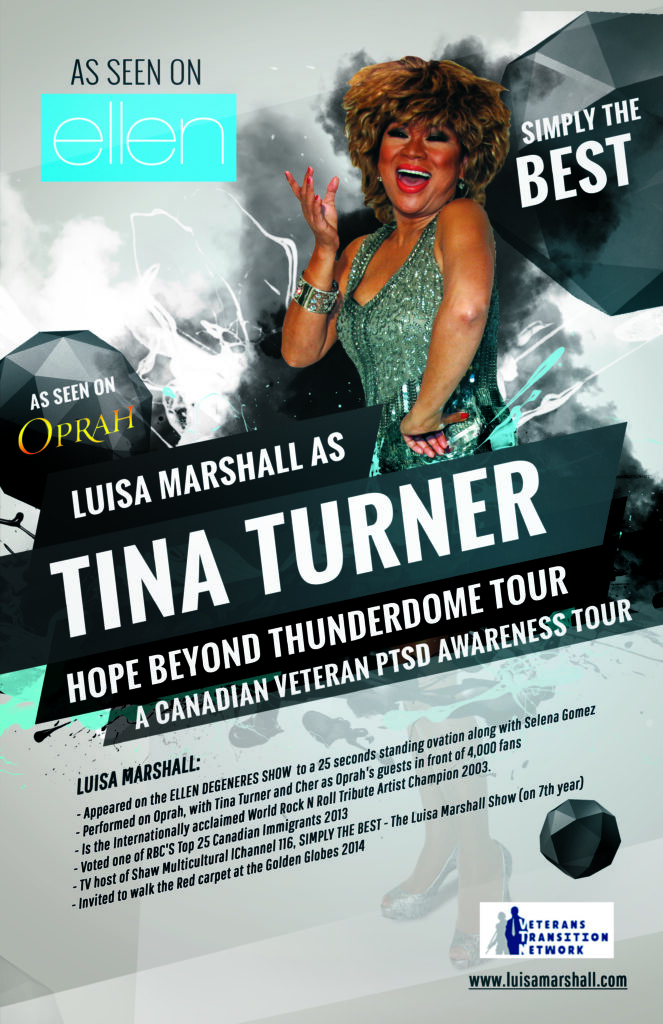 Luisa Marshall as Tina Turner in HOPE BEYOND THUNDERDOME TOUR 2016

FROM THE ELLEN DeGENERES SHOW TO CAMPBELL RIVER

TV host and Internationally Acclaimed World Champion Tina Turner tribute artist Luisa Marshall recently made a special appearance worldwide on the ELLEN Degeneres show on Oct 9/2015 to a 25-second standing ovation. Everybody thought she was the real TINA TURNER alongside all the other stars. See the full story here.

This weekend is the start of Luisa’s 3-month Canada-wide tour which will start in Vancouver Island and end up in St. John’s, Newfoundland. Marshall wanted to add meaning to the tour so she chose her passion concerning the PTSD concerns with the Canadian Military.

Luisa Marshall titled the tour “HOPE BEYOND THUNDERDOME”.  Years ago Luisa performed for the United Nations Peacekeeping Force in a grueling show tour that included war-torn Bosnia, Sarajevo and later the Multinational Force and Observers (MFO) in Israel and Egypt. The most requested song on both tours was WE DON’T NEED ANOTHER HERO (THUNDERDOME).  It took years before she realized THUNDERDOME was an metaphor of the state they were in at the time, and HOPE is what we need to give them.   Luisa thinks back about the young military men she met.  “they were like babies to me”  Marshall states. “they need our help”.

Luisa would like to raise awareness and in her own little way, in part, raise funds at the same time for Veteran PTSD issues.  Luisa has committed $5 of each ticket go directly to the Veterans Transition Network.  They do fantastic work with their Veterans Transitions Program (click to view a video about the program).

Marshall rocked several theatres in Canada including the Port Theatre and the Tidemark, hitting the international stage all over the world including Bermuda, India, Florida, Ohio, St. Louis, Seattle, Amsterdam to name a few, with 2 special appearances on OPRAH.

Luisa’s TINA is an EXPERIENCE. A spectacular show that audiences from all walks of life are still raving her powerful live vocal renditions of Tina Turner’s greatest hit songs such as Proud Mary, The Best, Better Be Good To Me, Private Dancer, What’s Love Got To Do With It, River Deep Mountain High, Let’s Stay Together and We Don’t Need Another Hero to name a few. A ton of fun and an electrifying night to remember. Bring your cameras because you could end up onstage as part of the show.

Watch the Queen of Rock and Roll’s life and music unfold before your eyes. Lots of excitement and surprises, Marshall might just belt out popular songs from her favorite Divas such as Shania Twain, Etta James, Lady Gaga, Amy Winehouse, Donna Summer, Meghan Trainor (All About That Bass) and more. Even the non-TINA fans are guaranteed to enjoy.

Watch the video (size of band and dancers may change)

Tickets: Admission $49.50 (+applicable taxes and fees) $5 from each ticket goes to the Veterans Transition Network