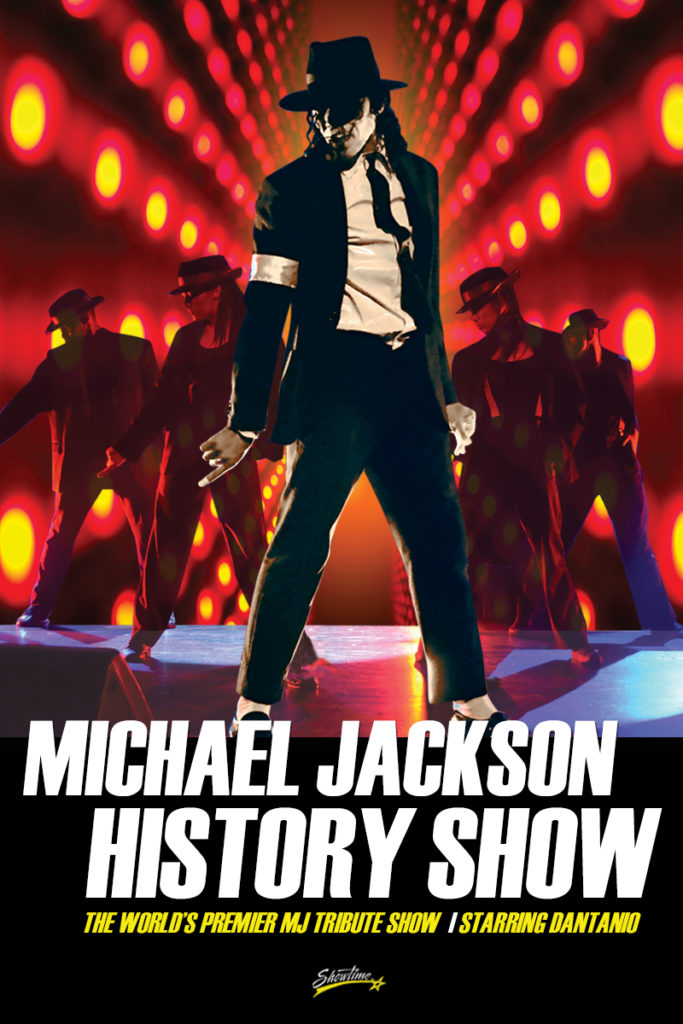 Showtime Australia presents this spectacular music tribute and full-scale stage production honouring the one and only King of Pop, Michael Jackson. Celebrate Jackson’s creative genius and unsurpassed talent with riveting live performances spanning his early days as a member of the Jackson 5, his groundbreaking theatrics in the 80s and his continued domination of Pop culture into the 21st century.

Songs include Thriller, Billie Jean, Smooth Criminal, Bad, Beat It, ABC, Don’t Stop Til You Get Enough, Human Nature, PYT, They Don’t Really Care About Us and many more.

Get the full Michael Jackson concert experience with accomplished impersonator Dantanio – electrifying in his role as Jackson – plus a live band, choreographed dancers, authentic costumes, state-of-the-art sound and theatrical lighting, vision and effects. Truly a mind-blowing stage production – do not miss it!

Born and raised in the Northern Cape Kimberley region of South Africa, Dantanio’s musical family and gospel upbringing undoubtedly influenced him at a young age and set him on a steady path to becoming the accomplished impersonator and performer he is today.

Singing and dancing from the age of nine, Dantanio accrued a vast array of performance experience through his teens and early adulthood, trying his hand at school bands, theatre, cabaret work, corporate entertainment, composing hit songs for contemporary Pop artists and even producing his own solo albums.

But in 2014 when the coveted part of ‘Michael Jackson’ opened up in one of the world’s biggest MJ stage productions it was a dream role for Dantanio in more ways than one. As well as allowing him to exercise his music, dance and theatrical skills, this part spoke to him on a personal level.

Dantanio’s fascination and connection with Jackson began as a small boy when he was introduced to the King of Pop through his older brother who brought home a copy of Thriller on cassette in 1989. The album had a sound and feel that Dantanio (indeed the world) had never heard before and with his acute musical mind, even at the age of eight, he soon became fixated, stealing his brother’s cassette any time he was gone from the house to play it on repeat and teach himself the now-famous choreography.

It was when he played the tape to exhaustion and broke it that he was ‘found out’ and consequently forced by his brother to show-off the results of his practice with a performance of ‘Billie Jean’. But instead of the jumble of awkwardness that was expected, Dantanio surprised his family with a shockingly astute imitation of the famous song and dance… his talent for impersonation was already evident.

In his teen years Dantanio’s obsessive dance practice continued as he taught himself to emulate every detail of the Pop star’s trademark dance style. So good was his imitation that it resulted in his disqualification from an amateur dance competition at age 16 because he was thought to be a professional dancer.

This overt and genuine love for Jackson was one of the key factors that won Dantanio his starring role in The Michael Jackson HIStory Show. The show’s Director, Johnny Van Grinsven, auditioned impersonators from around the world but found only one person had the unique combination of traits needed to fully inhabit the role – a technically astute voice, exceptional skill and style as a dancer, an observant nature and obsessive eye for detail, and a physicality that would mould easily to match Jackson’s, plus one special quality: “Dantanio knows and loves Jackson. Audiences can sense that… at the core of it all he is just a fan like them and that makes it special, genuine, real.”

Coming ‘full circle’ from his beginnings as an inspired young MJ fan, Dantanio is now fulfilling his dream touring the world and performing as his idol in Showtime Australia’s The Michael Jackson HIStory Show, thankful every day that he gets to uphold Jackson’s legacy and to share his music and message of love with fans new and old.

“It has always been my dream and vision to star as MJ on a world stage, he has given me so much joy and taught me so much… and he is still teaching me today.”

Groups of 6 or more receive $5 off per ticket! (adult only)