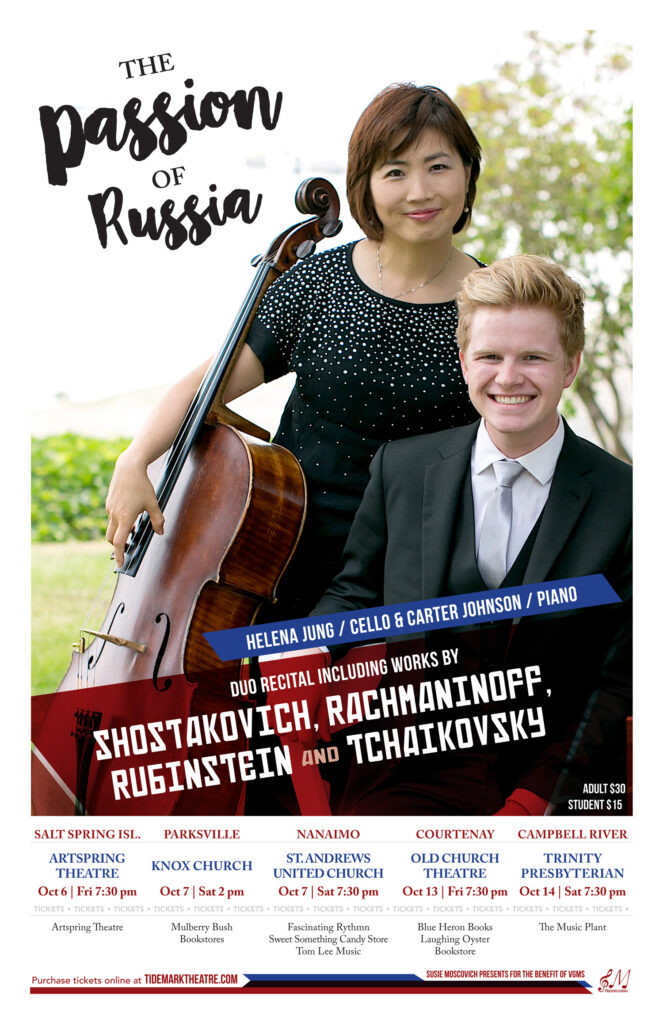 The Passion of Russia

Susie Moscovich Presents is pleased to showcase Helena Jung, cello, and Carter Johnson, piano, in a VGMS benefit concert of musical entertainment entitled “The Passion of Russia.”  The program includes works by famous Russian composers including Shostakovich, Tchaikovsky, Rachmaninoff and Rubenstein. The individual talent of these two performers is extraordinary, so we are especially pleased to bring them to you, together, in musical selections they chose to highlight the genius of these composers.

Helena Jung has had a diverse career as a soloist, chamber and orchestral musician, and teacher in Vancouver Island, B.C.  She vigorously pursues an eclectic repertoire. Since 2005 she has performed with many well-known pianists such as Sarah Hagen, Lynn Robinson, Dagmar Killan, Linda Lee Thomas, Glen Montgomery, Sean Mooney and Carter Johnson, as well as with the Vancouver Island Symphony. Helena received her BMus and MMus in Seoul, Korea and has performed with the Jeunesses Musical World Orchestra as a member and the Seoul Youth Philharmonic Orchestra, the Gyeonggi Provincial Philharmonic Orchestra as a principal.

As well, she participated in various musical programs, such as the Ratzeburger Sommer Akademie Festival in Germany and the Verbier Festival in Switzerland.  She has appeared as a soloist with the Seoul Youth Philharmonic Orchestra, the Ewha University Symphony Orchestra, the Gyeonggi Provincial Philharmonic Orchestra in Korea and the Nanaimo Chamber Orchestra. She has been invited as a performer and faculty to Concerts Denman, Lulu Performing Arts, Quadra Chamber Music Festival and CYMC.

Helena is a member of the Comox Valley Piano Society, BC Registered Teachers Music Association and the Island Baroque Ensemble.  Furthermore, she plays with the Vancouver Island Symphony Orchestra and is the leader of Vancouver Island Cello Ensemble. She has also had her own cello recital series; “Cellobration” and her students’ concerts; “hello, Cello” since 2007.

Johnson holds an ARCT in Piano Performance with Distinction, as well as an ARCT in Piano Pedagogy, for which he won the national gold medal. He began studies at age five with Shelley Roberts, with whom he worked for twelve years, and he now studies piano performance with Mark Anderson at the University of British Columbia, where he is entering his fourth year. In a short time he has established himself as one of the top collaborative pianists in the Vancouver area, specializing particularly in art song, and also working as a vocal coach with the UBC Opera Department. His secondary instruments are the oboe, voice, and harpsichord, the latter two of which he has studied at UBC. In addition to his musical career, Carter is an accomplished actor and speaker: he holds his ATCL with Distinction in Speech and Drama from Trinity College London, and has won many awards for his performances of Shakespeare.