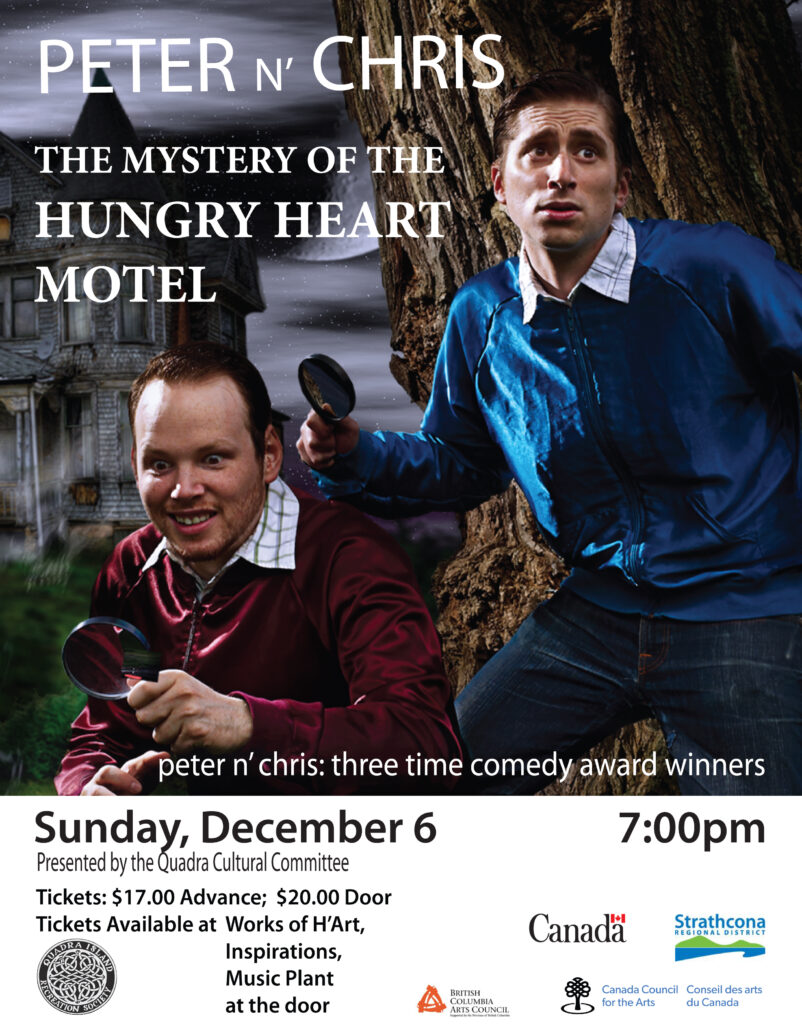 Peter n’ Chris and the Mystery of the Hungry Heart Motel

The Quadra Cultural Committee is pleased to present Peter n’ Chris and the Mystery of the Hungry Heart Motel at the Quadra Community Centre December 6th.

Peter n’ Chris and the Mystery of the Hungry Heart Motel is the most acclaimed show from Peter n’ Chris. It is a send up of of the horror and mystery genre, and pays homage to your favourite moments in classic films like The Shining, Psycho, and TV classic’s like The Hardy Boys and Scooby Doo.

The story focuses on Peter and Chris, two hapless everymen who become stranded on the side of a spooky highway. Their only option, is to take shelter at the mysterious Hungry Heart Motel. When they enter the are greeted by a murderous Motel Manager (The kind of person who looks like he’s been up all night killing people, because he has). However, when Peter and Chris decide they should stay the night, they are too preoccupied with the fact that they have to share a single, uncomfortable bed, that they neglect to notice the mysterious murders that are happening around them. Who is doing all the Murder’s at the Hungry Heart Motel? Well, we told you above – it’s the Motel Manager. There’s no real mystery there. He’s the killer. Hmm, okay, so we may have ruined a few things…

Peter n’ Chris (Peter Carlone and Chris Wilson) are a 3 time Canadian Comedy Award winning duo from Vancouver BC. (Best Sketch Troupe and Best Comedic Play 2013/2014). Having formed in 2009, the two have quickly risen in the Canadian comedy scene, becoming known for their long form, narrative, cinematic and extremely physical sketch comedy style that pushes comedic theatre to it’s limits. They gained their popularity on the Canadian Fringe Festival circuit, frequently selling out entire runs and winning numerous Best of Fest awards over their years of touring Nationally and Internationally.