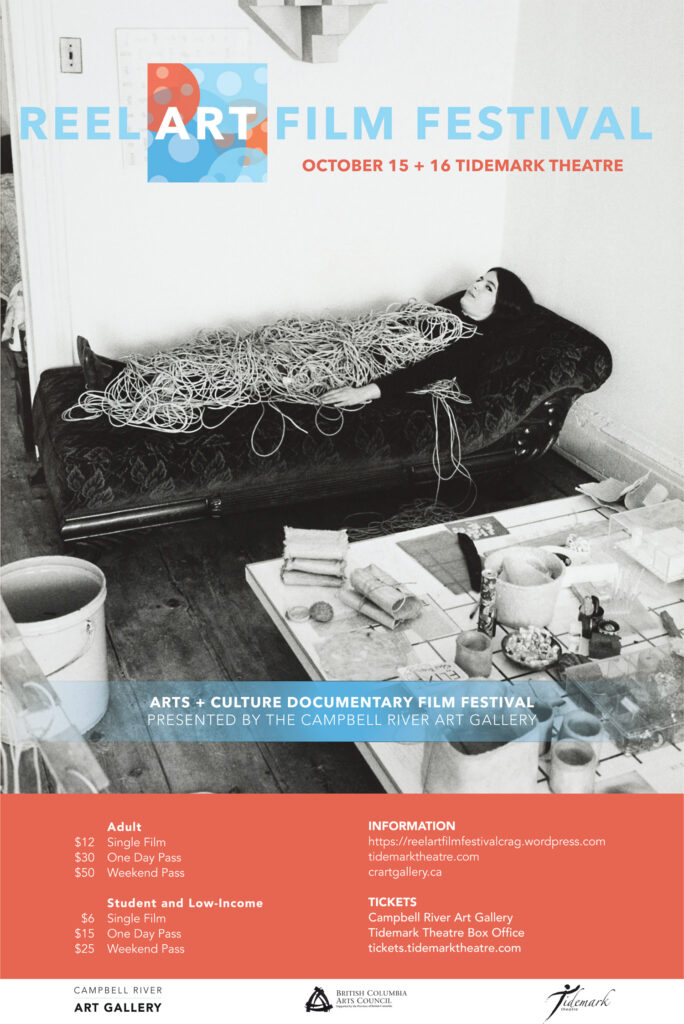 The Reel Art Film Festival is an arts and culture documentary film festival presented by the Campbell River Art Gallery. This festival brings together a unique collection of award-winning documentary films that address a diverse range of topics including music, poetry, First Nations history, LGBTQ issues, and youth in the arts. This event is a feast of brilliantly told stories and stunning visuals that highlight contemporary art and culture. Check out our schedule to learn more about the remarkable documentaries featured in the Reel Art Film Festival. And, in addition to the film program, several filmmakers and individuals featured in the documentaries will offer a personal glimpse at these films through post-screening Q&A sessions. Come join us for this exciting array of films that present inspiring stories and stimulating discussions.

This multiple award-winning documentary follows several passionate and talented high school students as they prepare for the world’s largest youth poetry slam. Every year since 2001, over six hundred students from sixty Chicago schools come together to compete in Louder Than A Bomb. This riveting film captures the experiences of four teams as they share their personal challenges and perceptions of the world through poetry. These young competitors bring an energetic enthusiasm and astonishing wisdom through their poems that emotionally impact the audience. Louder Than A Bomb also reveals how the team members become a family as they support each other in developing their writing. This is a film that will leave viewers with new perceptions on life, relationships, and creativity.

This feature film will be preceded by two short films directed by Lisa Jackson, Suckerfish, 2004 (8 minutes) and Savage, 2009 (6 minutes).

This powerful documentary by Lisa Jackson, tells the story of how the Canadian government forcibly re-located the Gwa’sala-‘Nakwaxda’xw First Nation to Port Hardy in 1964 and destroyed their homes, making it impossible to return. How A People Live follows the experiences of the Gwa’sala-‘Nakwaxda’xw people as they create a new life with limited resources, an oppressive residential school system, and extreme hardship. The film also reveals the fortitude of this group as they build a stronger community in spite of the homesickness for their lost land. Filled with touching interviews, rare archival photographs, and Jackson’s footage of their artistic practices and theatrical dances, How A People Live is a beautiful film and valuable story.

Please join us for a special post-screening Q+A discussion with the film’s producer Catrina Longmuir and a representative from the Gwa’sala-‘Nakwaxda’xw First Nation.

Landfill Harmonic tells the story of the Recycled Orchestra, a group of students in Paraguay who perform with instruments created from garbage. Growing up in Cateura, next to one of South America’s largest landfills, these young musicians have limited resources and opportunities, but the perseverance of this talented group brings them sudden and international attention. This moving documentary follows the musicians as they learn to play these unconventional instruments, as well as their struggles living in a poor area with a high flood risk. The Orchestra’s growing fame brings new opportunities along with unexpected challenges. Their passion and optimism reveal how something beautiful can emerge from difficulty. As the music director Favio Chavez states: “The world sends us garbage, we send back music.”

Using striking visuals, this documentary presents three remarkable stories of individuals who prevail in spite of losing the physical senses that are central to their art. An artist who slowly turns blind uses photography to perceive the world and questions what it means to “see” images, and the role they play in our life. A musician discovers how deep his love for music extends when increased hearing loss makes playing almost impossible. When a former female boxer, and the real woman behind the Academy Award-winning film Million Dollar Baby, loses half her brain in a fight, she must re-learn who she is and how to live through her painting. Shoulder The Lion breaks the conventions of filmmaking and is an artistic venture that speaks to the power of the human spirit.

An exceptional portrait of Eva Hesse, this film profiles one of the most remarkable and important contemporary artists of the 20th century. Passionately creative and ambitious, Hesse challenged the male-dominated art world by insisting that she be evaluated not as a female artist, but purely as a contemporary artist. Her sensual and organic sculptures stood out against the more accepted minimalist works of the time. This documentary is also a unique historical picture; during World War II Eva Hesse fled to the United States where she forged a new path for herself as a contemporary artist. Hesse’s life was filled with tragedy as she endured the early loss of her parents while her extended family members were killed in Nazi concentration camps. The traumas in Hesse’s life pushed her to channel personal struggles into her art and create more. While her life was cut tragically short, there is no doubt that Hesse’s work was groundbreaking; she pushed the limits of exhibition spaces and created surprising sculptural pieces using industrial and unusual materials. Her sculptures are deeply personal, vulnerable, and seemingly alive. Eva Hesse’s story is imperative for anyone interested in the mid-20th century shifts in contemporary art and the impact of women in the arts.

Vancouver director Sharon McGowan follows the fascinating work of Rosamond Norbury, a photographer whose diverse corpus includes black and white nudes, homoerotic cowboys, and other edgy gender-bending projects. The film covers Norbury’s photographic study of drag queens during their pre-performance rituals of costuming and applying make-up to take on new personas. Her latest project flips the process of “dressing up” and further examines gender play and performance by transforming several women into their imagined male counterparts. At times humorous and philosophical, this film offers an intimate look at people and their complex and multifaceted identities.

Viewer discretion is advised as this film screening contains mature content as well as nude and sexual photographs.