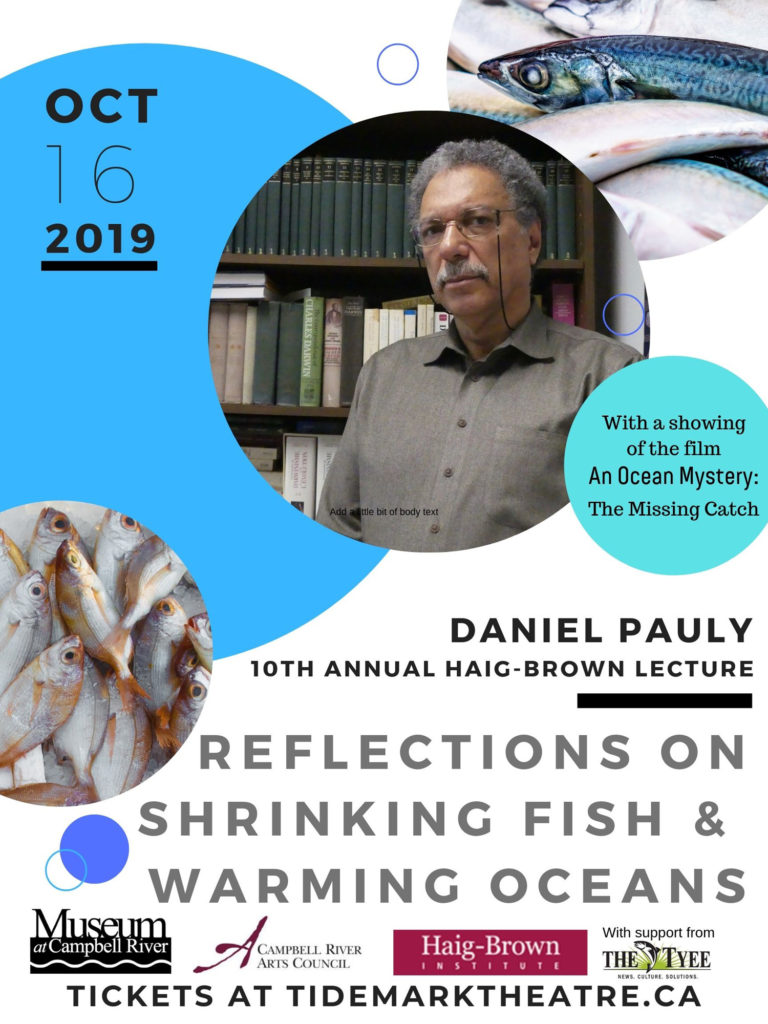 Reflections on Shrinking Fish and Warming Oceans by Daniel Pauly

Reflections on Shrinking Fish and Warming Oceans—a talk by famed fishery biologist Daniel Pauly followed by a showing of  ‘An Ocean Mystery: the Missing Catch‘, which explores Daniel Pauly’s work, by Alison Barrat

Did you know that fish as they get older are oxygen limited, which explains why they become smaller in warming waters? The world’s fisheries are changing and no one has documented the trends of overfishing and under-reporting of catches as doggedly as Daniel Pauly. Come hear the outspoken fishery biologist and author of Vanishing Fish share stories about shrinking fish, shifting baselines and warming oceans.

Born in Paris as the son of a Frenchwoman and an African American soldier, Pauly had a “Dicksonian” childhood in Switzerland. After rejecting an educational career in agronomy (the German professors were old Nazis) Pauly was trained as a fishery biologist to serve the growing fish trawling industry. As he witnessed and documented that industry’s impacts on ocean ecosystem in Asia, Latin America and Africa, he realized that only people could force governments to stop overfishing. In 1995 he coined the phrase “shifting baselines”  which explains why governments have been so slow to respond to overfishing or climate change. The UBC professor, author of more than 1000 articles and 30 books, now directs the Sea Around Us, a non-profit dedicated to studying and changing how industrial fishing impoverishes marine ecosystems.  Pauly, a speaker of four languages has been honoured in Canada, France and Germany for his pioneering work on the state of global fisheries. He says that his two great scientific mentors remain Charles Darwin and Rachel Carson. Science, Nature and the New York Times have profiled his iconoclastic science.

An Ocean Mystery: The Missing Catch by Alison Barrat takes viewers on fish detective story from Africa to Newfoundland.  It explores the data tracking of Daniel Pauly and explains why so many catches go unreported.“We need to know how many fish have been taken from the ocean in order to figure out what we can catch in the future,” warns Pauly.