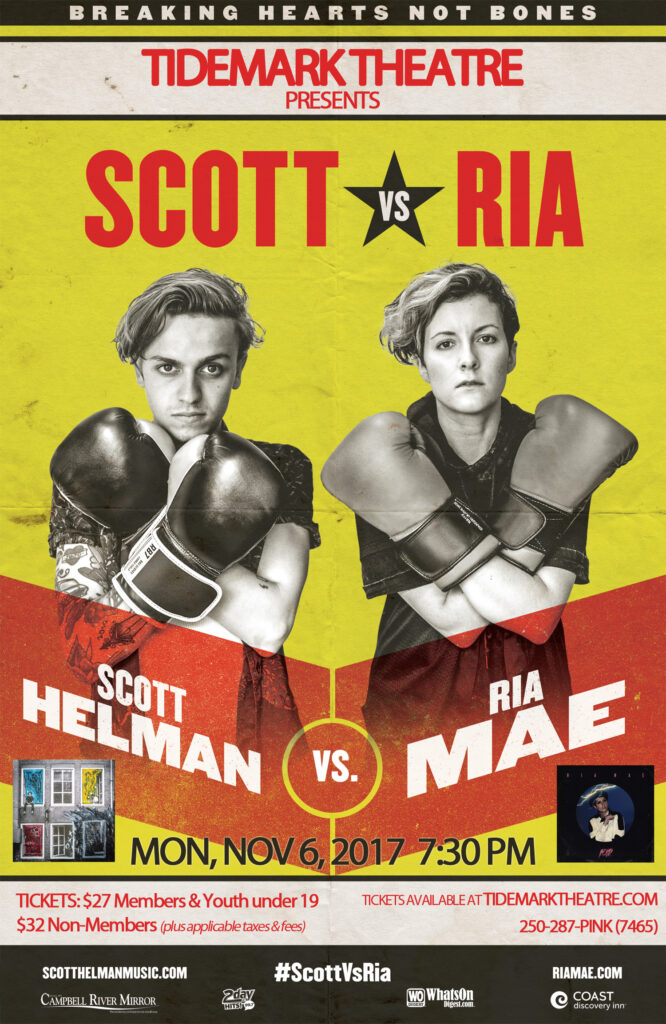 “Scott better be bringing his ‘A’ game,” demands Ria in making the announcement. “I’m going to mean business on this tour.”

“Fans should be prepared for a Battle Royale every night,” Scott asserts in response.

Ria and Scott first met at the Calgary Juno Awards in 2016 where both celebrated first time nominations for their debut releases – Ria for her breakthrough hit “Clothes Off,” and Scott for the ubiquitous “Bungalow.” Ria is currently enjoying radio success with her latest sing “Bend” which spent four weeks on CBC’s Radio 2 Top 20 Chart and is currently the #1 most added track all formats at Canadian Radio.  Scott Helman’s current single, “Kinda Complicated,” spent three weeks at #1 on the CBC Top 20 chart and reached #2 on the Hot AC chart at mainstream radio.  The track, taken from his recently release major label debut, Hôtel de Ville, is currently at # 18 on the CHR chart.

Finding his musical influences in album-focused artists like Arcade Fire, Bruce Springsteen, Neil Young, The Cure, Bon Iver and Paul Simon, Canadian singer-songwriter Scott Helman returns May 12, 2017 with his debut full-length album, Hôtel de Ville. Recorded in Toronto at Revolution Recording and produced by Tawgs Salter (Lights, Walk Off The earth, USS), the album’s first single is the irresistible pop alternative track “Kinda Complicated” which applies breezy, catchy songwriting and winking-lyricism to either a failed relationship or his own daily struggle with ADHD.

Ria Mae (The singer-songwriter from Halifax, NS) has had an exceptional 2-years, and she keeps the momentum going with “Thoughts on Fire”, the fourth single off her self-titled debut album. The song has already received over 4 million streams globally on Spotify.