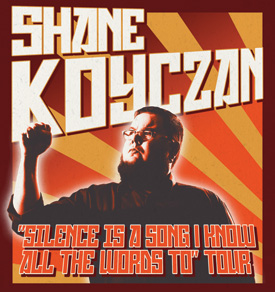 Internationally recognized author and spoken word artist Shane Koyczan has emerged as a creator of poetry that dares to belong to the people and speak directly to them in their own voice. In 2013, he collaborated with animators to make the anti-bullying viral video “To This Day” which has had over 13 million views, and he performed a customized version “For the Bullied and the Beautiful” to acclaim at the 2013 International TED Conference in Long Beach, California. Shane shapes his words and delivers in multi mediums from authored, video, spoken word, operatic, and musically performed.

“Shane Koyczan is nobody’s fool, as shown by the way he’s armoured himself in Teflon with the release of his new album, Silence Is a Song I Know All the Words To. On the record’s penultimate track, “Troll”, he trickles scorn onto “you, who crept into our lives, with tongues like knives stabbing your words into our skin… [Who] turned your hate into stones and hurled them at beauty, as if you couldn’t bear to see anything other than ugly/anything different,” effectively nullifying any kind of critical response.” – The Georgia Straight

“His poems are full of heartache and memory that touches so deep that emotion crackles in the air around you. And, sure, there are moments of utter, gut-wrenching sadness… But out of this sadness comes such strength, truth and hope that we want to stand up and cheer. Such is the power of Koyczan’s words and delivery.” – Monday Magazine