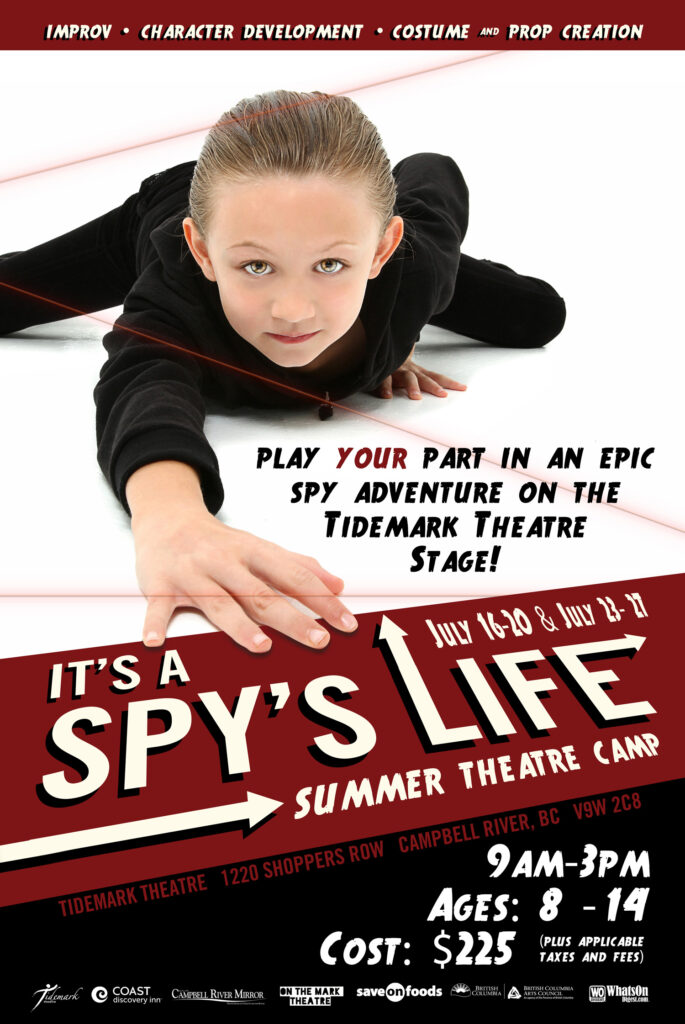 A secret government agency has developed and trained a group of young spies in order to infiltrate and capture a renegade group of young rebels trying to take over the world’s information networks.

Join On the Mark Theatre and the Tidemark Theatre in this two week theatre camp for students ages 8-14. Improvisation, character development and theatre skills, along with costume and small prop creation will all be covered in the Camp. Participants will create their own characters that will play a part in an epic spy adventure. It’s A Spy’s Life!

What to expect at the camp

Participants will have the opportunity to learn key acting techniques such as character development, projection and memorization. Improvisational theatre skills will be used to create a short original production for family and friends to be held at the conclusion of the camp. Participants will also create an original masked character during our mask-making sessions.

Improvisation, or improv, is a form of live theatre in which the plot, characters and dialogue of a game, scene or story are made up in the moment. Often improvisers will take a suggestion from the audience, or draw on some other source of inspiration to get started.

What can improv help me with?

Advanced listening
Active listening on and off the stage. Being in the moment and truly hearing what someone is saying.

Build off one another “yes, and..”
How to make an idea build into something wonderful and unexpected. Supporting other people and making them look good. Making an idea “Our” idea.

Freedom from the fear of failure
It’s okay to take “risks”. We learn more from our mistakes than successes. “Improv teaches you to be resilient in the face of failure, and be authentic when things don’t go well,” ~Tom Yorton, CEO of Second City.

Craft a compelling story
Improv feeds the importance of story telling. Learn to become a story teller that is able to construct narratives that have others buy into.

Build confidence
Unleashing your own confidence and creativity and being comfortable with the unexpected.