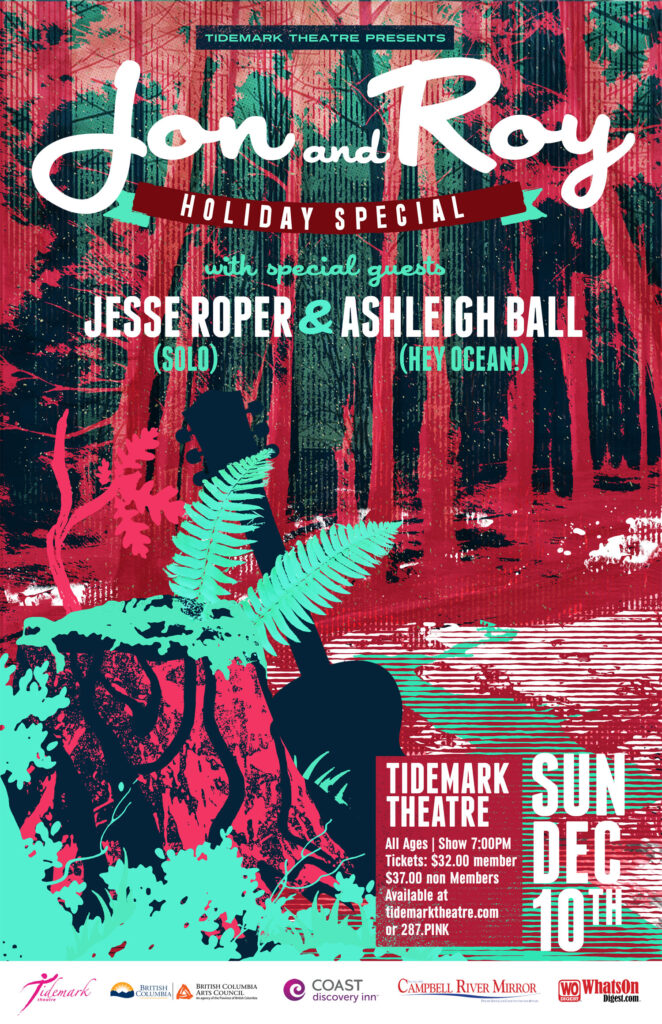 Vancouver Island’s favorite holiday music celebration, The Jon and Roy Holiday Special comes to the Tidemark Theatre for the first time! Join us as we kick off the holiday spirit and festivities with some of the west coast’s best talent. Jon & Roy will be joined by special guests Ashleigh Ball of Hey Ocean and Jesse Roper (solo).

Ashleigh Ball is celebrated Canadian musician and voice actor. Best known as the magnetic frontwoman for Canadian indie pop band Hey Ocean, she is proud to release her first solo EP Gold in You. Written and recorded in Los Angeles with Grammy nominated producer, Ajay Bhattacharyya aka STINT (Gallant, NAO, AllunaGeorge), Gold in You is a distinct departure from Ball’s Indie roots towards a more bold and mature sound. Featuring songs like Crazy and Lover, the EP explores themes of asynchronous relationships and the paradox of wanting two different lives at once: stable vs. chaotic or reality vs. dream. The EP was written over the past two years while Hey Ocean was on hiatus and demonstrates the full range of Ball’s vocal abilities both through gripping emotional ballads and electronic and R&B inspired tracks.

Victoria BC’s Jesse Roper is magnetic. With an explosive live show, the genuine quality and charisma of his versatile blues rooted soul, rock and country funk is as approachable as his charm. Quickly gaining momentum, the wheels on Jesse’s faithful van keep turning, chronicling a year of extensive touring and success of becoming a major festival draw. The nostalgic may appreciate his throw back vibe akin to Stevie Ray Vaughan and vintage Texas blues, however, Jesse Roper’s music remains current, the organic rawness of his vocals and guitar over shadowing any preconceived stereotypes made of blues musicians. His youthful energy captivates audiences while his knock out live performance blows them away.