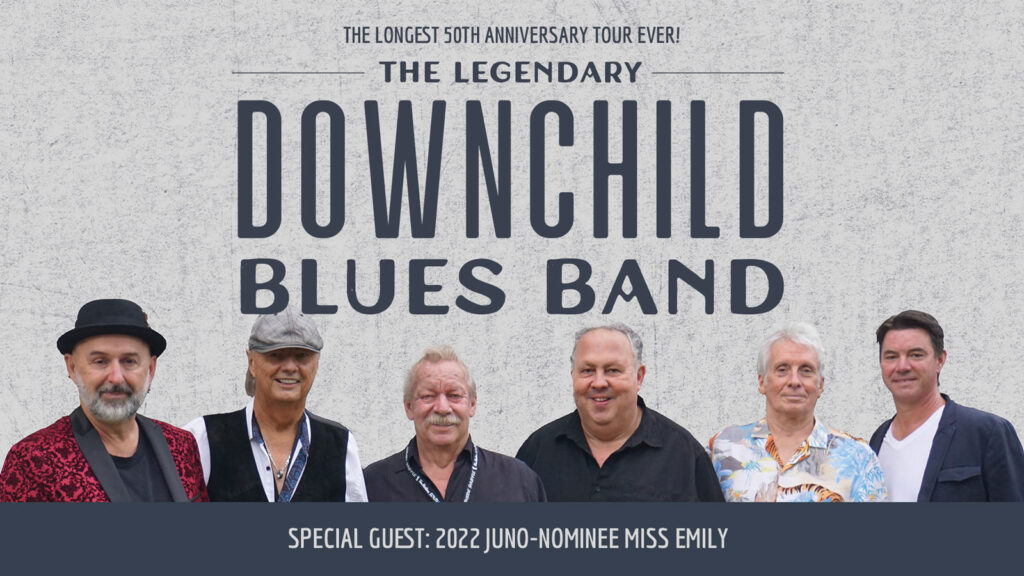 THE LONGEST 50TH ANNIVERSARY TOUR EVER!

After 19 albums, countless awards and wowing sold-out audiences around the globe, THE LEGENDARY DOWNCHILD BLUES BAND are celebrating over 50 years of playing the blues with a brand-new show featuring their hits like “Flip, Flop & Fly,” as well as fan favourites and hidden gems from throughout their illustrious career.

Downchild came to international prominence as the inspiration for Hollywood stars Dan Aykroyd and the late John Belushi’s hit film, The Blues Brothers. In fact, two Downchild songs, “Shotgun Blues” and “I Got Everything I Need (Almost)” were even covered on The Blues Brothers’ 1978 multi-platinum album Briefcase Full of Blues.

Founder, Donnie Walsh, the band’s main songwriter, was inducted into the Canadian Songwriters Hall of Fame in 2019, alongside some of the greatest songwriters of our time, like Leonard Cohen, Neil Young and Joni Mitchell.

With their signature jump-blues style and infectious, soulful sound, Juno Award winners Downchild deliver a live performance that is second to none and good times guaranteed!

In February of 2020 at the Maple Blues Awards in Toronto, Miss Emily walked away with Female Vocalist of the Year, New Artist of the Year and the Sapphire Canadian Blues Music Video Award. This national recognition hearkened back to her early days of county fair singing competitions. In 1993 a then 12 year- old Emily Fennell was winning accolades not by emulating Whitney Houston or Celine Dion like her peers but by channeling Ray Charles and Aretha Franklin; belting out song choices that belied her age. Those traditional influences would be the foundation of a career characterized by fearless honesty and a constant connection to the roots of popular music.

Along the way, she acquired an unparalleled work ethic by playing night after night in bars along Ontario’s 401 corridor while refining her songwriting and gaining a loyal following. Miss Emily has captivated fans across Canada, the US, the UK and Western Europe with her unique combination of impassioned performances and incomparable vocals that soar to emotional heights and span the genres from soul and classic Motown, to jazz, gospel and blues. Despite two decades of electrifying audiences in ten different countries, Miss Emily is just beginning to flourish.