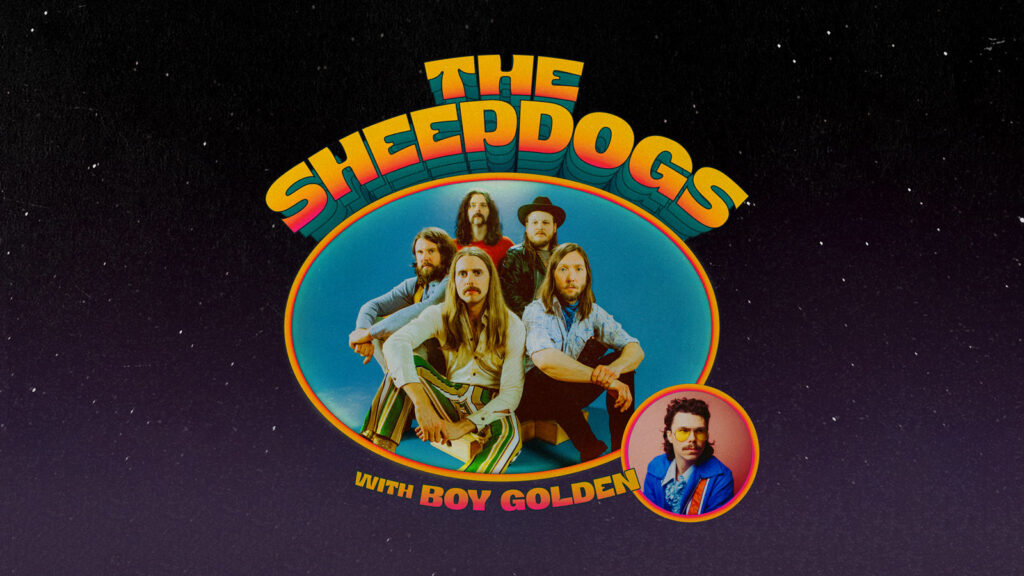 Hailing from Saskatoon, three-time JUNO awarding winning artists THE SHEEPDOGS burst onto the international scene after beating out thousands of artists in 2011 to appear on the cover of Rolling Stone Magazine. Since then, The Sheepdogs have amassed six JUNO nominations and toured worldwide.

The Sheepdogs return this spring with music from their new album Outta Sight, the grooviest, simplest, most penetrating album of their career. Recorded during the pandemic the band—Ewan Currie, Ryan Gullen, Sam Corbett, Jimmy Bowskill and Shamus Currie—were, like the rest of us, confused, cast ashore, and feeling isolated during COVID. Their response was to do what came most naturally to them: making stripped-down rock ‘n’ roll.

“It’s a weird world. Everybody stuck in place, overthinking absolutely everything. We wanted to avoid all that—just get in the room, plug in your guitar and go. So that’s what we did,” says singer Ewan Currie, who cut most of the album’s tracks in three takes. “Themes like optimism in the face of adversity, standing tall and staying strong, knowing that better times are around the corner kept coming through when making the record and it felt really damned good to play.”

Responding to the pandemic—the fear, the lack of income for a group that earns their living playing hundreds of annual shows—the Sheepdogs did what was instinctual to them since they started jamming like they did in their teens. With no roadmap and an overall uncertainty hanging over the universe, the band got in a circle, plugged into their amps, shared riffs and melodies and leaned on each other. The guys say it was the least prepared they’ve been cutting a record since their self-titled album in 2012. Bassist Ryan Gullen calls the music they made a life raft.

“Rock ‘n’ Roll is about cheering us up. Simple as that,” says Currie. “We hope our music does the same for the listeners at a time where things still can feel very tough. There’s no greater truth than rock ‘n’ roll.”