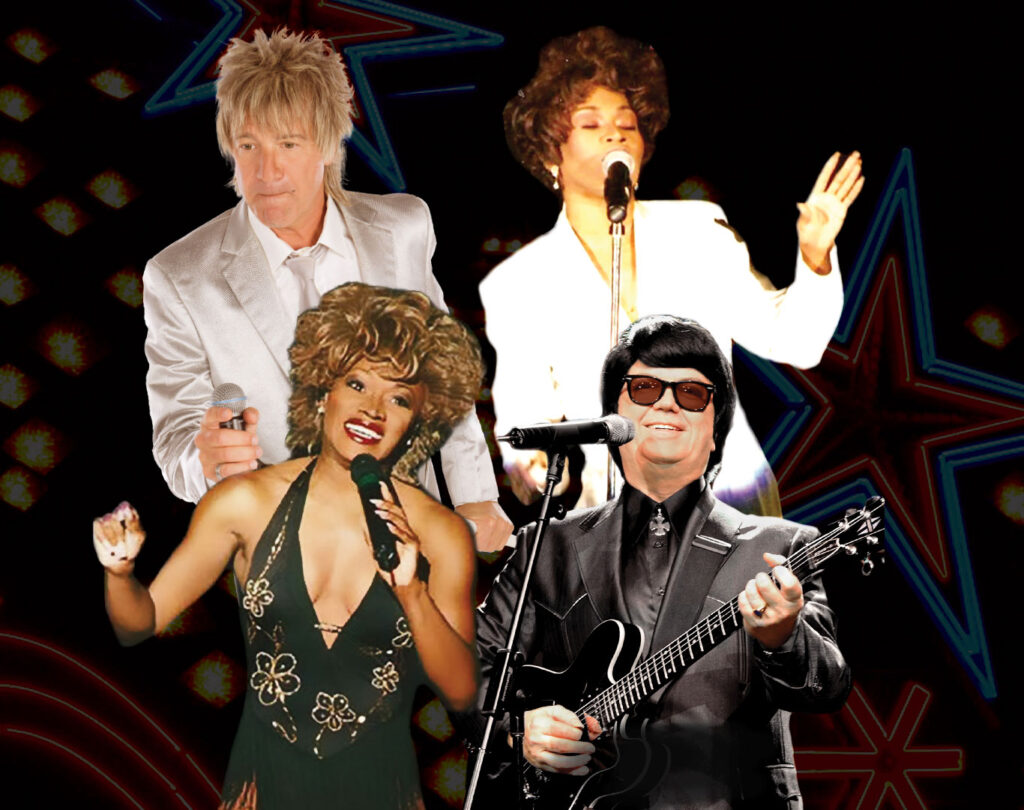 Legacy North Productions presents an Iconic Superstars Tribute Show, featuring Tina Turner, Whitney Houston, Roy Orbison and Rod Stewart! Where else outside Las Vegas could you see four of the world’s top entertainment legends all together on one stage.

Bringing her high energy, charismatic and incomparable voice is “Legends In Concert’s” Lori Mitchell-Gay, as the sizzling hot Tina Turner and Whitney Houston. Lori has graced stages throughout the United States and the World. Her humble beginnings were cultured in the church choir in her hometown of Philadelphia, Pennsylvania. Lori will take you on an entertainment journey through hits like “What’s Love Got to Do with It,” “Simply The Best,” “Good to Me” and “Proud Mary” as well as Whitney’s greatest hits such as “How Will I Know”, “I’m Every Woman” and “I Will Always Love You”.

Portraying Roy Orbison is fellow Legends in Concert alumni, the one and only Brian McCullough whose vocal, talent and spot-on portrayal of Orbison has won him respect both personally and professionally from those who knew the legendary musical icon. Since his first gig at the Tropicana in Atlantic City, he has enjoyed repeat appearances in casinos throughout the US; extended runs in Nashville, Myrtle Beach, Branson, and resorts in Mexico. Brian will be bringing songs from all of Roy’s era of music including “Pretty Woman”, “Mean Woman’s Blues” to the legendary “Only the Lonely”.

Rounding out this group of Superstars is John Anthony whose tribute performance to Rod Stewart absolutely shines. His crowd pleasing renditions of hit songs such as “Maggie May”, “Forever Young” and “Hot Legs” always gets the audience singing along. John Anthony is one of the mainstays with the world famous Legends in Concert show. He has toured America, Canada, Europe, and Japan. He has also performed in countless casinos, corporate events, cruise ships, and numerous fundraisers.

Legacy North Productions delivers an amazing array of talent that will truly take you on a retrospective journey back in time with performances than include glamourous showgirls, an electrifying rock and roll band and the incomparable voices of our Iconic Superstars!