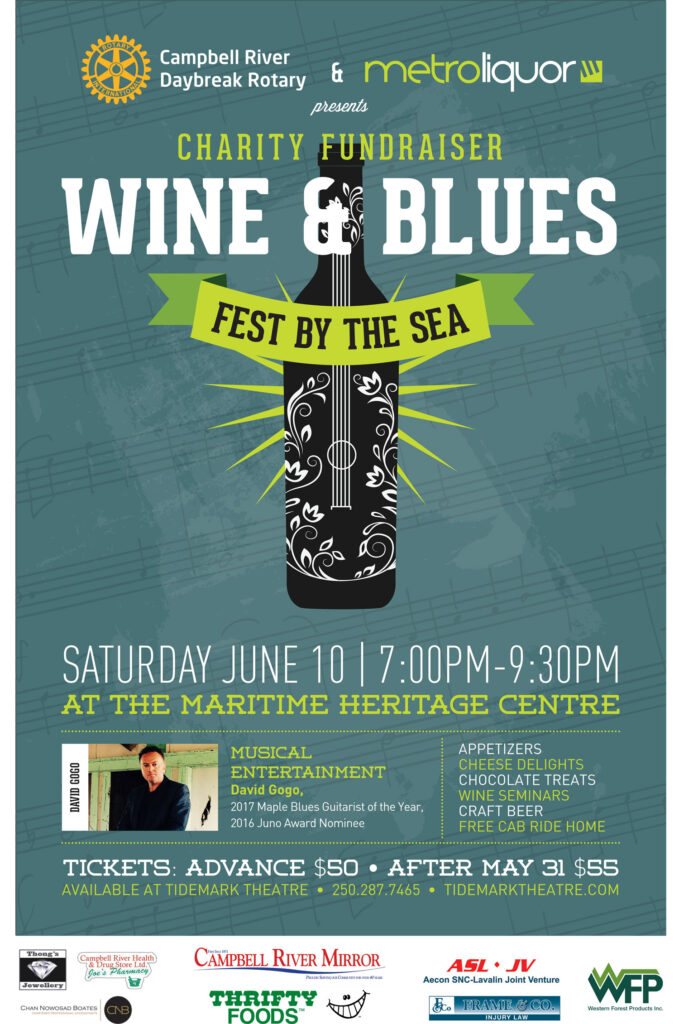 DayBreak Rotary with Metro Liquor presents the 8th annual Wine and Blues Fest by the Sea!

If you like discovering a good wine join us for an evening of some whites, reds and blues! You are almost guaranteed to find just the wine that matches your palate at the eighth annual Day Break Rotary Wine and Blues Fest by the Sea! At the Campbell River Maritime Heritage Centre, the evening of Saturday, June 10th 2017 from 7:00 PM to 9:30 PM.

“We have over 12 winery representatives with wine from regions all over the world and this year 4 craft beer tasting tables,” said Theresa Marson, one of the coordinators of the event. “The wine tasting is complemented by a special selection of cheeses, cold cuts, breads, fruit dishes, spreads etc. all generously provided by Thrifty’s Food and a variety of tasty treats provided by Super Mario’s Bar & Lounge, Rocky Mountain Chocolates, Natural Pastures Cheese, and Grieg Seafood. In addition, the ticket price also includes attendance at wine pairing “Winespeak” seminars, samplings of specialty wines, door prize and a silent auction and – of course! – free taxi service home within the Campbell River area after the event.

And not to be missed!

We have live entertainment with David Gogo the 2017 Maple Blues Award winner for Guitarist of the Year and 2016 Juno Award Nominee. David Gogo’s groove-fueled blend of blues and rock is the basis for a singular and storied music career. His songs have been featured in film and television and are regularly played on blues radio programs the world over. He has earned numerous Canadian blues accolades, including five JUNO nominations, a Western Canadian Music Award, a CBC Saturday Night Blues Award, and multiple Maple Blues Awards. He has thirty years of performing and hundreds of thousands of tour miles under his belt. He’s played on stage with Johnny Winter, B.B. King, Otis Rush, Albert Collins and Bo Diddley. He has opened for George Thorogood, ZZ Top, The Tragically Hip, Buddy Guy, Charles Bradley, Robert Cray, and Jimmy Vaughan among many others. Gogo can swap road stories for as long as you can listen!

Not to be missed are the 4 craft beer tables represented by Hoyne Brewing Company, Phillips Brewery, Russell Brewing, and Beach Fire Brewing.