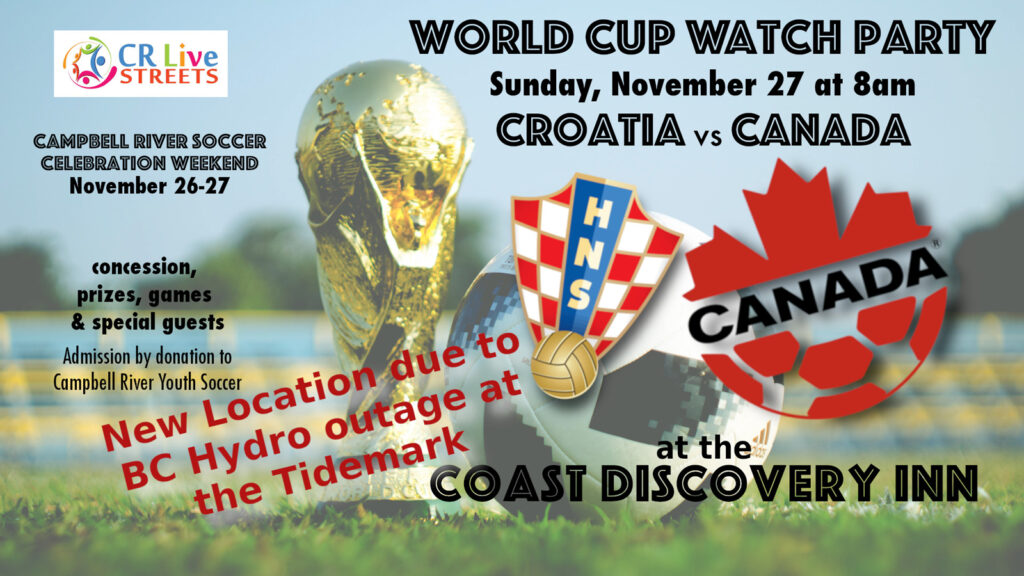 With the Canadian men’s soccer team reaching the World Cup for the first time in a generation, excitement and attention to soccer is at an all time high. Campbell River has a long and proud soccer history and a strong community of fans and players of all levels. With that in mind, November 26 and 27 has been dubbed “Campbell River Soccer Celebration Weekend”. The event centres around a community watch party for the World Cup match between Canada and Croatia on the Sunday morning at 8am, but the weekend includes youth soccer and the highest level of men’s soccer in town, as well as a movie showing and foosball tournament, all free for the community to take part in. 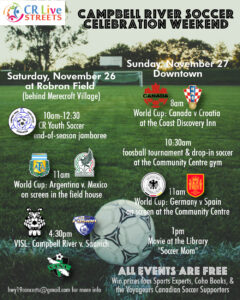 The events begin on Saturday, November 26 the Robron turf field behind Merecroft Village with the final day of the Campbell River Youth Soccer Association (CRYSA) fall season. Over 400 local kids from four to fourteen years old are enrolled in house league this fall season. The World Cup match between Argentina and Mexico will be on screen upstairs in the field house, and snacks will be available courtesy of parent volunteers, with donations accepted to CRYSA.

Then at 4:30, still at Robron Field, Campbell River Golden Wings host Saanich Fusion FC in Vancouver Island Soccer League men’s division 2 action. The Golden Wings have had a strong first half of their season but need all three points at home to Fusion if they hope to stay in the hunt for promotion to VISL’s first division.

On Sunday the scene shifts downtown for a community watch party of Canada’s World Cup match against Croatia. Initially planned for the Tidemark Theatre, the event has been moved to the Coast Discovery Inn due to a BC Hydro planned outage that will effect the Tidemark that morning. Canada’s second World Cup match will be shown in the conference room with theatre seating for 200. Live half-time commentary will be provided by local soccer experts, there will be door prize giveaways, and food and snacks available from the Coast Discovery Inn restaurant and lounge. Admission is free with donations accepted to Campbell River Youth Soccer. Attendees are encouraged to wear red and to get loud cheering on Canada.

Following the big game, the Community Centre gym will be open for drop-in soccer and a foosball tournament, and the World Cup match between Germany and Spain will be on screen at 11am, and at 1pm the Library will be showing the 2008 family comedy film “Soccer Mom”.

Meanwhile at the Robron turf, Campbell River Youth Soccer’s U14 boys rep team hosts Mid-Isle from Ladysmith at 12:45 and the U15 boys host Surf SC from Nanaimo at 2:30.