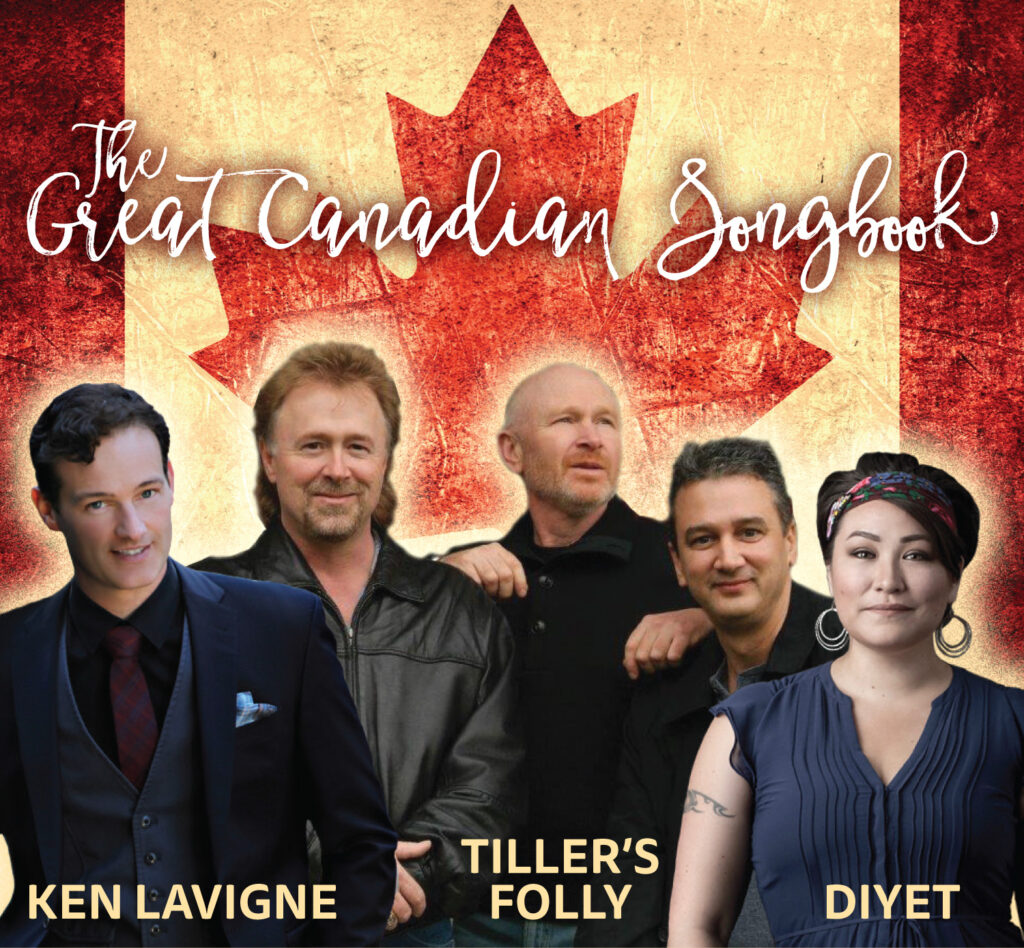 The Great Canadian Songbook is a show that highlights some of the greatest Canadian songs of the past and present taking audiences on a musical journey from Bon Vista to Vancouver Island! Drawing from a wide array of music and a variety of genre’s, features performers Ken Lavigne, Tiller’s Folly and Diyet, combine stories, music and projections, to provide the audience a stylistic overview of Canada’s greatest hits! Featuring the music by Leonard Cohen, Stan Rogers, Joni Mitchell, Neil Young, Buffy St. Marie, Anne Murray & Stomp’in Tom Connors in addition to contemporary artists including the Bare Naked Ladies, Blue Rodeo and original songs by the Great Canadian SongBook performers.

Ken Lavigne, Tiller’s Folly and Diyet have created this show in celebration of Canada’s 150th Anniversary Celebrations. They have followed each other on tour across North America and always talked about performing together and finally it is happening to celebrate Canada!

Ken Lavigne – Why am I excited about this collaboration?  ” I am really enjoying the rediscovery of some of these Canadian songs, tunes that I have been humming for a long time but actually having an excuse to really sink my teeth and perform has been awesome. That and listening and working with Bruce, Nolan and Laurence (Tiller’s Folly)  and Diyet is a real thrill. Favourite song in the show… “Impossible to answer really, but I would say Stan Rogers’ Northwest Passage”

Diyet – What is your favourite song on this show?  “Universal Soldier,  100%. This song has never been more relevant to me then at this time in the state of the world. A great and lasting song will always be teetering on the edge because it speaks truths that we don’t want to hear or be reminded of. And isn’t that the job of the poet and artist to speak the truth in a language that we can all understand and can’t forget?”

Bruce Coughlan, Tiller’s Folly  – Why a show with these songs? “As Canadians, I think we search for identity within a diverse Canadian cultural landscape. Our vision of the Great Canadian Songbook is based on our experiences growing up in the 1960’s, 70’s and 80’s. The Great Canadian Songbook for Millennials might sound entirely different.  But  these songs from all genres of music speak to each Canadian in a different way.”

Singer Ken Lavigne has charmed his way into the hearts of concert goers across North America with his exciting blend of classical tenor sound and modern Pop style. Ken is a singer, songwriter, storyteller and consummate entertainer. Recognized early for the outstanding timbre of his lyric tenor voice as well as the ease and agility with which he sings, Ken’s career has taken many artistic directions that includes current touring shows: The Road to Carnegie Hall, with 30 shows each year in North America where Ken shares his dream of singing at the iconic Carnegie Hall and fulfilling that dream with a sold out show to his very popular Christmas Show – The Ken Lavigne Christmas RoadShow with 20 shows in December 2016.

As one of the tightest most focused folk bands in the nation, Tiller’s Folly continues to make music that is both distinctly Canadian and firmly rooted in the acoustic tradition as they celebrate their 20th Anniversary in 2017!  They are modern day storytellers of lore, uniting past with the present. Based in the Pacific Northwest, Tiller’s Folly are a critically acclaimed, internationally traveled power trio at the forefront of a bold new movement in roots music. For the past two decades, through thousands of performances stretching from the Pacific North-west to The Carolinas and across to the British Isles and beyond – they have spread their memorable blend of energy, history, musicality, romance and just plain fun! Tiller’s award winning productions continue to expand and refine their potent mix of acoustic & electric based, Celtic influenced Canadiana, Americana, Newgrass ‘and beyond.’  Tiller’s Folly is Bruce Coughlan, Nolan Murray and Laurence Knight.

Diyet – Born in a tent, raised in a two room cabin, classically trained in opera, now an alternative folk artist. This sub-Arctic-Southern Tutchone-Japanese-Tlingit-Scottish-Yukoner is your typical Canadian – the result of a long cold winter.  Diyet’s music is like her life – a mix of this and that but deeply rooted in the values of a traditional northern life.  From humble beginnings, Diyet went on to acquire a degree in music then worked as a songwriter in Vancouver.  Her songs are published in Japan, Canada and Europe.  In 2010, she left the big city and returned to her hometown of Burwash Landing with the determination to chart her own musical course.  Her debut album, The Breaking Point, went on to receive nominations for “Best New Artist” and “Songwriter of the Year” at the Aboriginal People’s Choice Music Awards in 2010 and 2011, “Album of the Year” at the Canadian Aboriginal Music Awards and remained on the Canadian Aboriginal Music Countdown for 24 weeks.

Sponsored by the Campbell River Mirror, Coast Discovery Inn and What’s On Digest, the Tidemark Theatre proudly presents, Great Canadian Songbook at the Tidemark Theatre on March 29, 2017.   Tickets are $27 Members, $32 Non-Members (plus applicable taxes & fees) and can be purchased at the Box Office Tuesday through Friday between 12pm and 4pm.  Tickets are also available online:  tidemarktheatre.com.