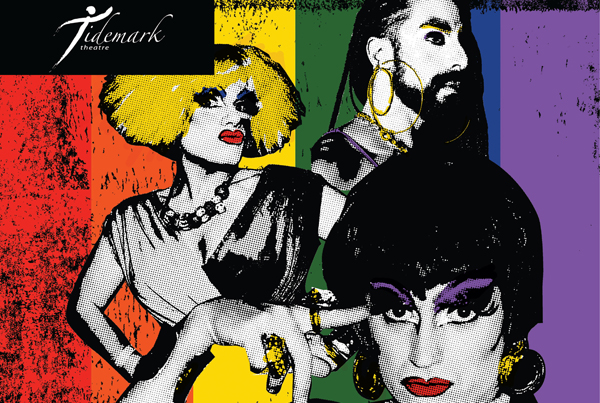 “Apocalypstick is one part The Judy Garland show one part Jerry Springer and a big part of FABULOUS!”- Isolde N. Barron

APOCALYPSTICK! is East Vancouver’s biggest drag show, and is considered one of the city’s best. Featuring The Queen of East Van Isolde N. Barron as well as a rotation of the city’s finest talent, Apocalypstick titillates shocks and engages audiences. Accompanying the Queen on her Island tour is Baddest Bitch Peach Cobblah and Beardoncé.

The Queen of East Van, Isolde N. Barron, is a multifaceted theatre artist. Past Entertainer of the Year, her fundraising endeavors at High School Confidential, For the Girls and Queer Bash earned her a “Drag Queen of the Year” nomination for Xtra’s Hero Awards.  She has co-created and performed in Tucked & Plucked: Vancouver’s drag HerStory Live on stage!and 20 Minute Drag School.  She was the Associate Director on the Vancouver Playhouse’s final production of La Cage aux Folles.  After hosting Apocalypstick: East Van’s Drag show every Sunday for two years at the Cobalt she has shifted her focus to the theatre company her alter ego Cameron Mackenzie founded: Zee Zee Theatre, which just wrapped up its sixth season with Dave Deveau, aka Peach Cobblah’s newest script, Lowest Common Denominator at the PAL Theatre in Coal Harbour.

Peach Cobblah is known as the Baddest Bitch of Vancouver. With her wife Isolde N. Barron she has created Twenty Minute Drag School for the Firehall’s BC Buds Festival as well as Tucked & Plucked: Vancouver’s Drag History Live Onstage! which continues to pop up around town. Peach currently produces and hosts the hottest night in Vancouver: HUSTLA, the city’s only monthly queer hip-hop event at The Cobalt where she also runs The Gay Agenda: Glitter & Skin, a monthly party celebrating all forms of masculinity. She is the host of Shame Spiral, a devilishly regretful drag show Tuesday nights at 1181.  You may also recognize Peach from her turn as the dominatrix Hanna in last fall’s La Cage Aux Folles at the Vancouver Playhouse. As a boy Peach is known as award-winning playwright Dave Deveau.

Beardoncé was born on The Cobalt stage at The Mr./Miss Cobalt 2014 competition, and has been keeping herself busy on various stages around Vancouver since then. Sean Parsons is a graduate of the Capilano University Musical Theatre Program, and has had a passion for performing since early childhood. A trained singer, actor and dancer, Sean incorporates his theatrical training into every Beardoncé performance, and loves to take each audience on a journey. Beardoncé is grateful to every Queen and promoter and bar owner who has given her a stage to perform on. Let B Entertain You!

Sponsored by the Campbell River Mirror, Coast Discovery Inn and Shadoe Intimates Inc., APOCALYPSTICK! Pride Party will be held at the Tidemark Theatre following the North Island Pride Festival in Sprit Square on June 27th, 2015 at 8:00pm.  Tickets are $22 for Members and $27 for Non-Members (plus applicable taxes and fees) and can be purchased at the Box Office Thursday – Saturday between 12pm and 4pm.  Tickets are also available online at:  tidemarktheatre.com.