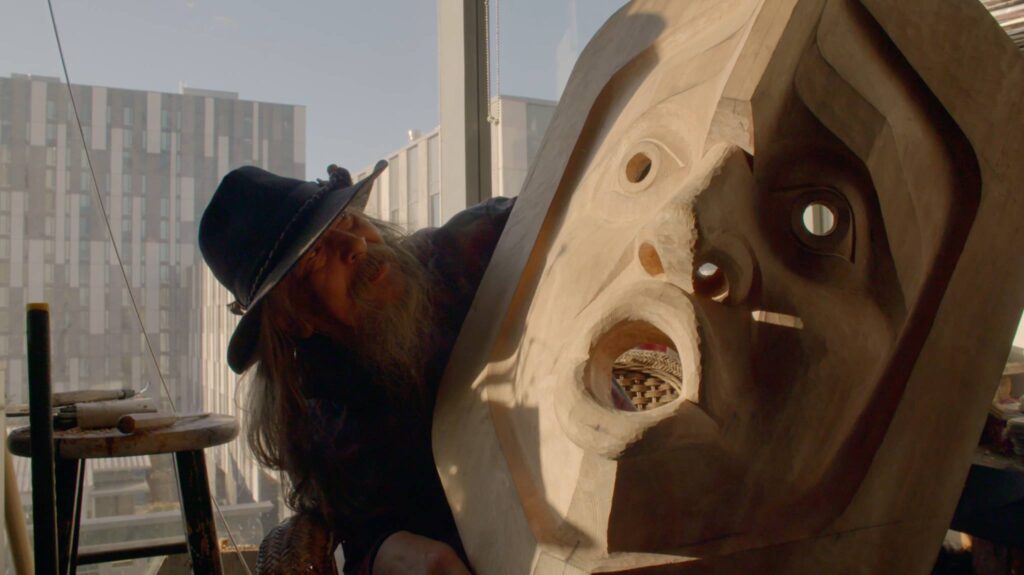 The Tidemark Theatre, Campbell River Museum and the Campbell River Arts Council are proud to present a special screening of, Maker of Monsters:  The Extraordinary Life of Beau Dick with special guest, Linnea Dick.

Maker of Monsters is a portrait of a Canadian art legend. He was an enigmatic carver from a small remote village on the Northwest Coast of British Columbia.

Beau Dick’s remarkable masks have been celebrated across the global art scene as vibrant expressions of West Coast Indigenous culture and a sophisticated crossover into the contemporary art world. Dick had an unprecedented ability to tap into the collective memory of his people and breathe new life into age-old traditions.

Maker of Monsters gives an intimate look into the life of one of Canada’s greatest artists. Beau Dick worked within an ancient tradition and rose to the ranks of international success within the white cube world of contemporary art while never forgetting his roots.  This film strives to capture the essence of Beau Dick and his mysterious enigma as an artist who symbolized Canada’s history with the First Nations and the ethical dilemmas faced in reconciling with that colonialist history. Beau was able to use his celebrity to call attention to the injustices done to his people and the environment.

Even in his activism, Beau relied on his culture to inform him how to be political. He didn’t simply stage protests; he enacted ancient ceremonies, creating a public display infused with spirituality. He challenged the Canadian government, chief-to-chief, on his own terms and by using traditional Kwakwaka’wakw political protocol, with minor adjustments for the contemporary situation. He carried out the ceremonial act of breaking a Copper and shaming the Canadian government on two occasions. First, on the steps of the Parliament Building in Victoria, BC, and then one year later on the steps of Parliament Hill in Ottawa. The Copper Breaking Ceremony is a spiritual and political act that had not been performed in over 100 years.

In reaching into his past, the stories of the Kwakwaka’wakw nations are also brought to the forefront; their rich history, their dramatic mythology, and the deep scars left by colonialism. Weaving together the personal and cultural until both become inseparable, Meet Beau Dick presents an artist who succeeded in reconciling the two.

Maker of Monsters strives to unearth the factors that made Beau who he was – his deep connection to identity, family, and community, his struggle with addiction – and like a carver chipping away at a block of wood, his story brings truth and understanding out of the woodwork. Meet Beau Dick illuminates a man whose art and life continue to transcend expectations and boundaries.

Special guest speaker Linnea Dick is a writer, orator and activist from the Kwakwaka’wakw, Nisga’a and Tsimshian nations. She became involved in Indigenous activism in 2013 with a conviction to create social change and help heal the injustices faced by Indigenous peoples. Through this work, she began to heal and recognize her purpose in life – to advocate for Indigenous youth, culture and sexual assault victims through public speaking. During the last two years, she worked closely with UBC, where her late father, Beau Dick, was an artist in residence. He continues to be one of the biggest inspirations in life; a strong sense of identity, integrity and dignity instilled within her. In 2015, she had a written piece published in the book Lalakenis/All Directions: A Journey of Truth and Unity, sharing her journey through activist movement “Awalaskenis” and the importance of connection to culture. More recently, she collaborated with artist, Jeneen Frei Njootli, sharing poetry for her artist project “red rose and lidii,” published in C Magazine — a contemporary art magazine. Linnea continues to share her story through different avenues, and in her spare time enjoys writing, hiking, meditation and yoga. She chooses to live as her ancestors did: on the path of sobriety and with love for her community.
​

Sponsored by the Campbell River Mirror, What’s On Digest and Coast Discovery Inn, Maker of Monsters:  The Extraordinary Life of Beau Dick will screen at the Tidemark Theatre on June 8, 2018.   Tickets are ‘Pay What You Can Admission’ or a suggested donation of $12 and can be purchased at the Box Office Tuesday through Thursday between 12pm and 4pm. (Online and phone orders will be processed at the suggested donation price.)  Tickets are also available online:  tidemarktheatre.com OR 287.PINK!