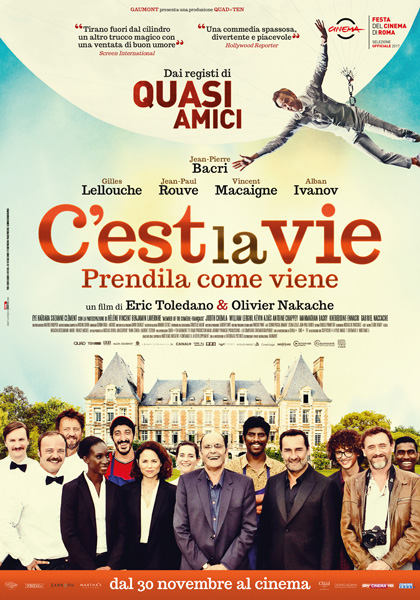 This effervescent comedy from celebrated French directing duo Olivier Nakache and Eric Toledano (The Intouchables) invites us to an opulent château to attend a très extravagant wedding, where the groom is an obnoxious tyrant, the band is at war with the organizers, and the chief planner is looking for the exit.

Max (Jean-Pierre Bacri) is a battle-weary veteran of the wedding-planning racket. His latest — and last — gig is a hell of a fête, involving stuffy period costumes for the caterers, a vain, hyper- sensitive singer who thinks he’s a Gallic James Brown, and a morose, micromanaging groom determined to make Max’s night as miserable as possible. But what makes the affair too bitter to endure is that Max’s colleague and ostensible girlfriend, Joisette (Xavier Dolan regular Suzanne Clément), seems to have written him off, coolly going about her professional duties while openly flirting with a much younger server. It’s going to be a very long night… especially once the groom’s aerial serenade gets underway.

An Altmanesque ensemble work brimming with offbeat, lovable characters, and hilarious set pieces, C’est la vie! is a fiendishly smart, sprawling comedy as only the French do it. You will be laughing all the way down the aisle.

Not Rated; French with English subtitles