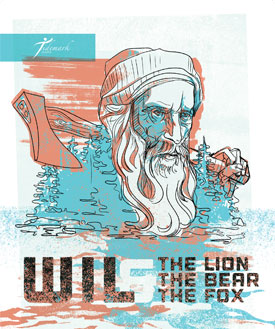 Double Header – WiL and The Lion The Bear The Fox

The Tidemark Theatre proudly presents a Double Header – WiL and The Lion The Bear The Fox!

“Remember that guy in high school who never used to come out because he was holed up in his basement practicing guitar for a band that never materialized? Well, he grew up to be “Wil”.

Wil began playing guitar at age 13…. At 41, he makes no apologies for the white in his beard and laughing admits he can hardly wait to get old so he can sing the songs he spent a life time writing.

Live, Wil is a force of nature. One review quotes “The man works a guitar so hard, it inches toward igniting during a set. Often times, it relents to the strain of such fierce play by popping off a string or two, as if to wave a white flag of surrender if only for a moment,..” His famously intense, enigmatic performances have earned him accolades including a nod for WCMA’s “entertainer of the year”.

The Lion The Bear The Fox

It took Christopher Arruda (The Lion), Cory Woodward (The Bear) and Ryan McMahon (The Fox) over thirty years to find each other but only one month for this “musical force of nature” (Nanaimo Daily News) to realize they were meant to join their voices as one.

After securing a top 20 position in 102.7 The Peak’s prestigious “Peak Performance Project”, the band released their debut EP “We’d Be Good Men” on October 8th, 2013 and went on to celebrate the effort in numerous sold-out venues across BC and Alberta. The self-produced record is steeped in character with performances captured in bedrooms, hallways, board rooms and open-spaces across British Columbia. By experimenting with sounds freely and building the sonic landscape from the ground up, “We’d Be Good Men” succeeds in showcasing a genuine energy and sincerity rarely heard this side of the 2000′s.

In less than a year, the lion the bear the fox have cemented themselves as a hard-working Canadian band with an uncompromising dedication to performance. 2014 will be the year they start to deliver their energetic brand of “stomp rock” to the United States and beyond. Gone are the days of the boy band. Harken the era of the man band!