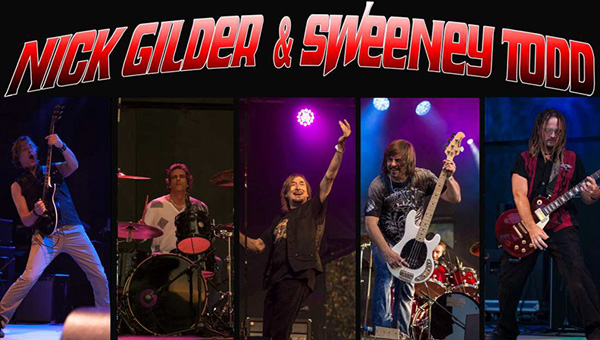 Proudly sponsored by 97.3 The Eagle

Sweeney Todd was Nick Gilder’s first group and they earned their rock wings playing in every conceivable venue in the seventies.

Earning multi Juno and #1 multi-platinum status, these songs are still heard on the radio, reminding us of long hot summers. Sweeney Todd is the soundtrack of our lives.

These days Nick and Sweeney are rocking festivals, casino showrooms, fairs, and theatres with classics like Hot Child in the City, Roxy Roller, Here Comes the Night, You Really Rock Me and Let Me In.

“It’s still a kick to sing the songs, and hearing a crowd sing along is truly motivating for me,” Nick said to New Music Express Magazine’s Keith Sharp in a recent interview.

Throughout his illustrious career, Nick Gilder has written and recorded many Top 20 hits internationally. He has seen recent success with a song he penned, When The Lights Go Down, remixed by Armand Vanhelden, who scored with Justin Timberlake’s Get Sexy Back in Britain, Europe, and Australia.

The years have seen Nick work with some of the world’s most famous producers including the Beatles George Martin and Mike Chapman, and Peter Coleman of Blondie and Pat Benatar fame. He has also written hits for some of the business’ top performers, including Bette Midler, Patty Smyth & Scandal, Pat Benatar and Joe Cocker.  The variety of artists who have covered his songs testify to his diverse influences, totaling over 20 million copies sold worldwide.

Ray Materick is the son of an evangelical preacher, who had previously played saxophone, trumpet and clarinet in his own dance band during the 1940s and 1950s. Materick’s recording career commenced in 1972, with the release of Sidestreets on Kanata Records, considered to be one of Canada’s first independent record labels. The label folded soon after Materick’s album was released. His major national breakthrough came with the release of Neon Rain in 1974 on Warner Bros./Asylum Records, featuring the hit single “Linda Put The Coffee On”. A number of albums followed throughout the 1970s: Best Friend Overnight (1975) and Midnight Matinee (1976), as well as Fever In Rio (1978).

During the 1980s, Materick withdrew from music for a period of approximately eight years. He returned to recording as of 2000, releasing seven albums of new material in two years, and has regularly released new material and compilations since that time. In recent years, Materick has been involved in a band project, “Peace On Earth”, with Keon Crosswell (bass, guitar) and Dan Kolthof (drums).