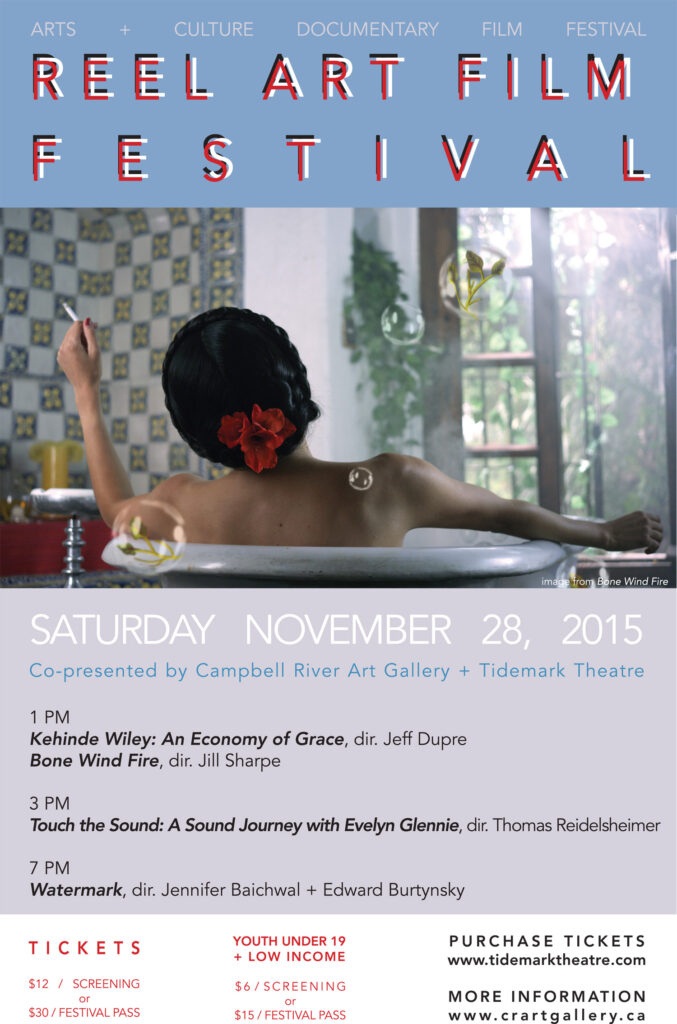 The Reel Art Film Festival is a fundraiser for the CR Art Gallery, in partnership with the Tidemark Theatre Society

Kehinde Wiley: An Economy of Grace

Known for his vibrant, larger-than-life reinterpretations of classical portraits featuring young African-American men, New York-based visual artist Kehinde Wiley has turned the practice of portraiture on its head — and in the process, has taken the art world by storm. Kehinde Wiley: An Economy of Grace follows the artist as he steps out of his comfort zone to create a series of paintings of women for the first time. Kehinde casts his models on the streets of New York and then enlists Riccardo Tisci of Givenchy to create couture gowns for each woman. The film traces the artist’s process from concept to canvas as he reveals to us another side of black femininity.

Bone Wind Fire is an intimate and evocative journey into the hearts, minds and eyes of Georgia O’Keeffe, Emily Carr and Frida Kahlo—three of the 20th century’s most remarkable artists. Georgia O’Keeffe lived and painted in the sun-baked clarity of the American Southwest; Emily Carr in the lush jungled green of the BC rainforests; and Frida Kahlo in the hot and dusty clamour of Mexico City. Each woman had her own response to her environment, to the people that surrounded her and to the artistic or practical challenges she faced in wringing beauty and truth from her particular time and place. Using the women’s own words, taken from their letters and diaries, Bone Wind Fire reveals three individual creative processes in all their subtle and fascinating variety.

Touch the Sound: A Sound Journey with Evelyn Glennie

Evelyn Glennie is one of the world’s most celebrated percussionists, and has produced acclaimed work in the classical, pop, and avant-garde fields. Glennie’s collaborators include Icelandic avant-pop darling Björk, bluegrass-turned-jazz virtuoso Béla Fleck, the traditional Japanese ensemble Kodo, and pianist Murray Perahia. What makes Glennie’s accomplishments remarkable is the fact she is “profoundly deaf” – relying primarily on feeling vibrations through her feet and her body to stay in communication with her musical partners. Grammy Award winner, Glennie, not only refuses to see her deafness as a drawback; she generally doesn’t acknowledge it in interviews or media. Touch the Sound looks at Glennie’s life and career as she follows her passion for music, including her never-ending search for new instruments and percussive objects.

Featuring the stunning photography of renowned Canadian photographer Edward Burtynsky, Watermark is a feature documentary film that brings together diverse stories from around the globe about our relationship with water: how we are drawn to it, what we learn from it, how we use it and the consequences of that use. Through expansive Burtynsky visuals, we see massive floating abalone farms off China’s Fujian coast and the construction site of the biggest arch dam in the world, the Xiluodu, six times the size of the Hoover. We visit the barren desert delta where the mighty Colorado River no longer reaches the ocean, and the water-intensive leather tanneries of Dhaka. The combination of award-winning documentarian Jennifer Baichwal and master photographer Burtynsky, this is a spectacle to behold.