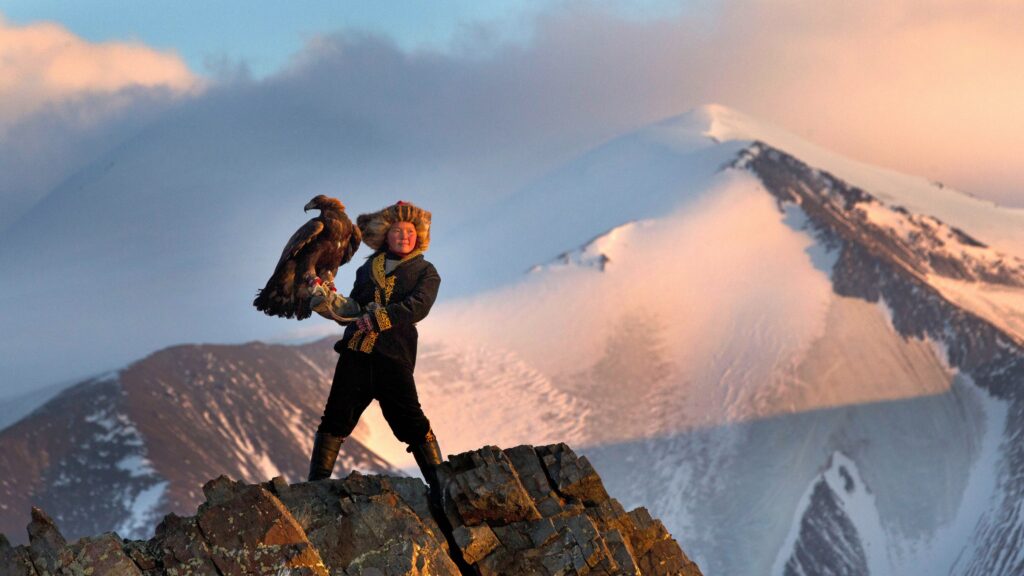 Executive producer Daisy Ridley narrates The Eagle Huntress, a visually stunning documentary about Aisholpan, a 13-year-old girl who becomes the first female in twelve generations of her Kazakh family to become an eagle hunter, and rises to the pinnacle of a tradition that has been handed down from father to son for centuries.

It seems impossible to conceive of training wild eagles, with their seven-foot wingspans and razor-sharp talons. Yet the Kazakh people have been doing so for centuries, and the practitioners in the Bayon-Ölgii province of Mongolia are the most faithful keepers of the sacred practice. For 13-year-old Aisholpan Nurgaiv, participating in this practice means being the first female in twelve generations of her family to become an eagle hunter.

Perched precariously on the side of a mountain, with a gigantic mother eagle circling overhead, the brave girl perseveres in the face of danger and manages to capture her own baby eagle. And this is only the beginning of her adventure: under her father’s tutelage, she remains tenaciously committed to the intense training necessary to her eaglet’s development.

Aisholpan’s natural gifts for understanding and communication allow her to form a lasting bond with the bird, and with her parents’ support, she becomes the first girl ever to take part in the Golden Eagle Festival, competing against 70 seasoned eagle hunters. But it is only after, when she goes on a hunt, that Aisholpan will seek her true rite of passage as an eagle huntress.

Narrated by executive producer Daisy Ridley, and featuring stunning cinematography by Simon Niblett, this riveting documentary from director Otto Bell is a rare look at one of the world’s last true wildernesses. It’s a larger-than-life story, but one that’s anchored by intimate moments. Our young heroine’s passion takes her on an incredible journey with an enriching and empowering lesson that will set hearts soaring.