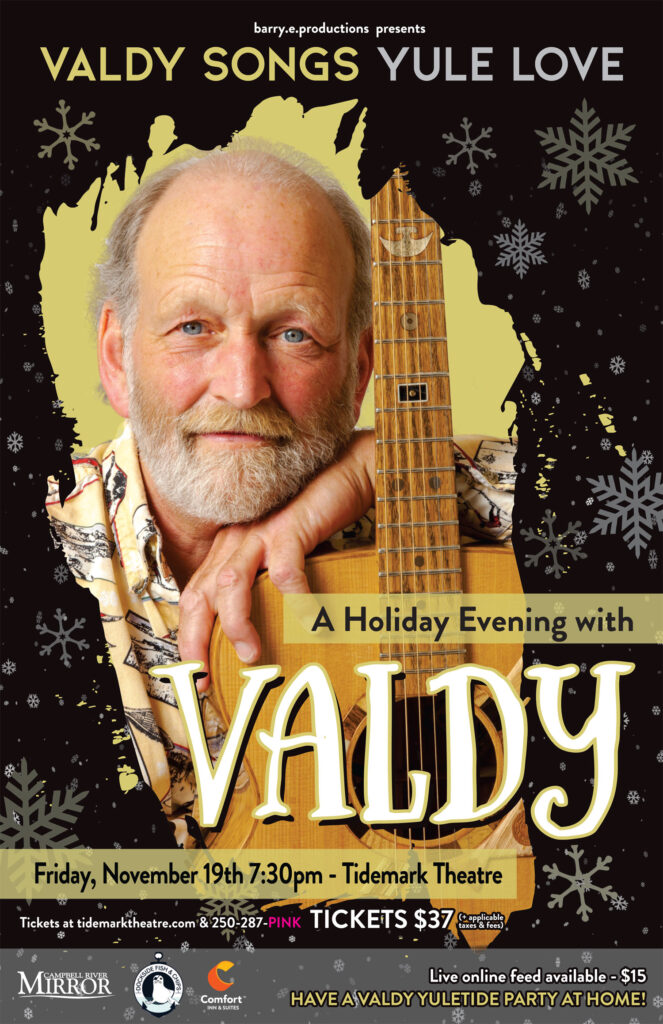 Spend a Holiday Evening with Valdy!

One of Canada’s most beloved performers, Valdy has earned admiration from fans and critics during a career spanning five decades.

“Like a bright ray of sunshine on a cloudy day, Valdy bounces onto the stage and the magic begins”

He began performing as a solo artist, and in 1972 recorded his “Rock and Roll Song” on Haida/A&M; it became a hit. His music was featured in the 1972 Steve McQueen film The Getaway. After that, his career never looked back. Touring has been his life since.

Valdy has toured Canada for forty-six years and plays regularly in New Zealand with Kiwi mate Graham Wardrop. He has also toured Austria, Denmark, Germany, Holland, Spain, Sweden, and Switzerland, and is an oft-invited performer at dozens of music festivals, including the Kerrville Folk Festival in Texas. In 2000 Valdy released the album Contenders with country musician Gary Fjellgaard He continued to tour with Fjellgaard for many years.

“He’s a master of country, folk, rock and blues, and the catch is that whatever the sound, people know that Valdy is sincere.”  ~ Saskatoon Star Phoenix

“Valdy remains one of the country’s purest and most credible storytellers.”  ~ Toronto Star

If you are not in attendance, you are not alone. Valdy’s performance will be live streamed, around the globe. Encourage your ‘far away’ people, to get together and have a ‘Valdy Holiday Evening’ in their own homes.

Come out, book online, celebrate, and enjoy a special evening!