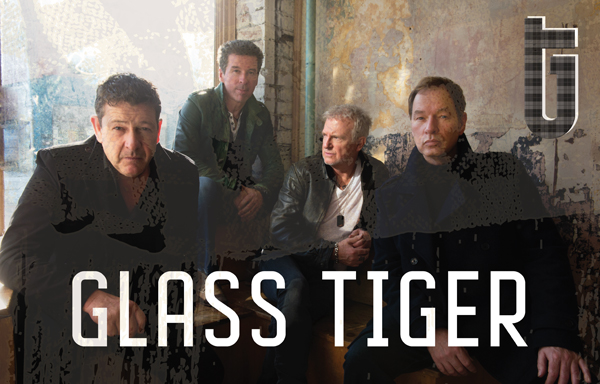 They say a great song, is a great song no matter the format, no matter the genre, no matter the era. Glass Tiger is synonymous with great songs from a genre and an era destined to be “classic”. Just as Singer, Writer, Performer, Johnny Reid has done, Glass Tiger has ventured into the studio and come out with 12 of their best songs totally re-imagined. These iconic songs, will be presented with all the exquisite charm, honesty and simplicity as the day they were written.

This simple, organic, amped up acoustic format will show the audience just why these legendary songs have stood the test of time. Welcome to “Wae Yer Family” (With Your Family) the perfect evening of music, friendship, family, and storytelling that are sure to capture your heart.”

“Our performances have never been tighter, and we are playing at our highest level ever, we are re-ignited, recharged and looking forward to every show.” Says lead singer Alan Frew.

Opening for Glass Tiger on this tour is ‘Country’s Adele’ – singer/songwriter Jessica Mitchell.  Mitchel is, at heart, a storyteller. She has spent the last decade digging deeper into her artistry, focusing on writing new music and crafting her richly unique sound. As a result, she has become one of the music industry’s best kept secrets. Her tracks; “Don’t Love Me” and “Tear It Down”, landed on multiple Spotify playlists, including the coveted Wild Country List with more than half a million followers.

She caught the attention of The Toronto Star and Global News, among others, when a video she posted to Facebook of her hearing her single “Workin’ On Whiskey” on the radio for the first time went viral. The track was the top added Canadian Country song to radio at the time of release. 2016 was a ground-breaking year for the rising star. In addition to opening for Kiefer Sutherland and Royal Wood on their Canadian tours, Mitchell performed at a number of major music festivals, snagged a coveted Guild Guitar Sponsorship, and achieved her first chart climbing hit single. Jessica was also nominated for a CCMA Award for Roots Artist of the Year. 2017 found her on tour with country music legend Terri Clark, Ron Sexsmith and Bonnie Raitt.

When listening to the music of Jessica Mitchell it is very easy to latch onto her inviting melodies and the genuine, soulful nature of her words. The rich tone and hopefulness in her voice grabs you and pulls you in. When the song ends you can’t help but feel as though you have personally connected with her on a deeper level.

Sponsored by the Campbell River Mirror, What’s On Digest, 2 Day FM and Coast Discovery Inn, the Tidemark Theatre and Gee Dan Productions proudly presents, Glass Tiger with special guest Jessica Mitchell at the Tidemark Theatre on November 6, 2018.   Tickets are $47.50 (+applicable taxes and fees) and can be purchased at the Box Office Tuesday through Thursday between 12pm and 4pm.  Tickets are also available online:  tidemarktheatre.com OR 287.PINK!