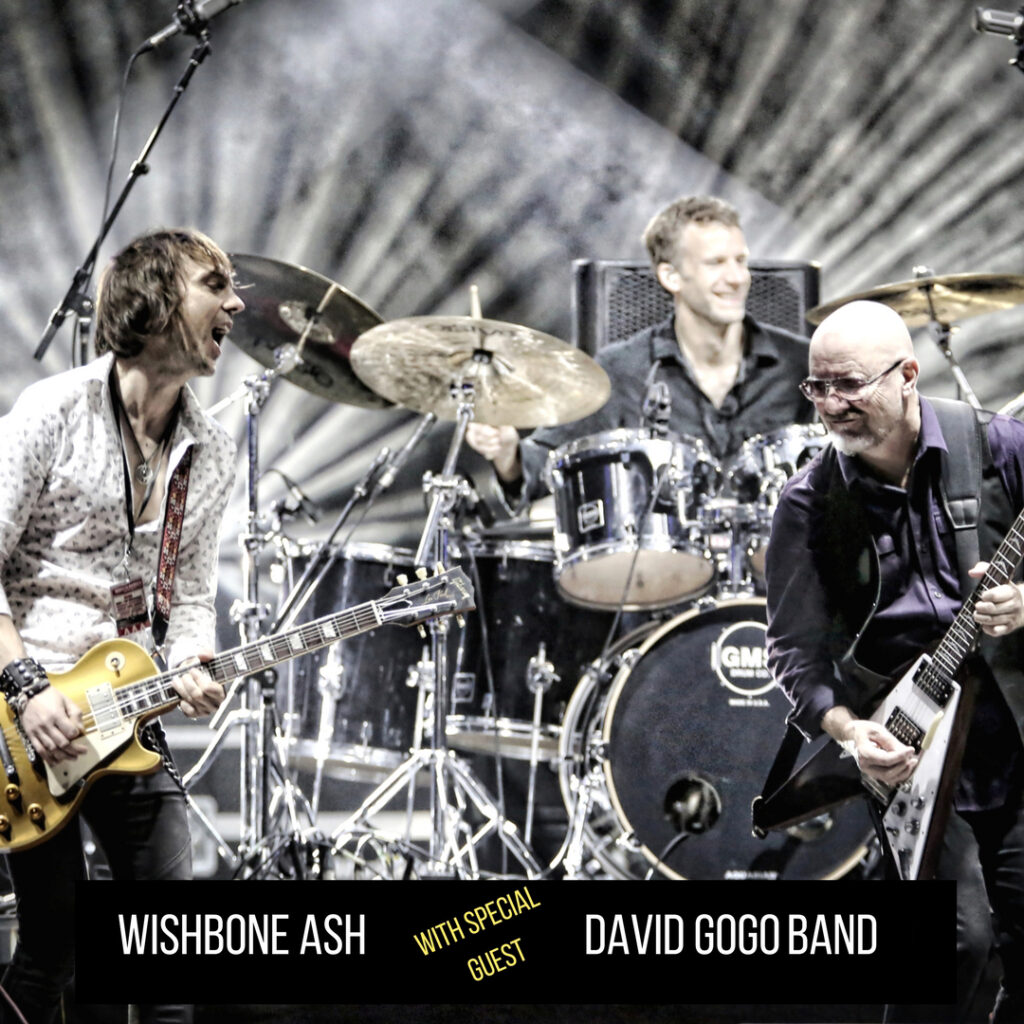 The Beatles, the Blues Boom and Psychedelia had made their impact on Classic Rock and the creative possibilities were infinite.  Pioneering the use of twin lead guitars, WISHBONE ASH jumped on board the burgeoning Progressive Rock scene in 1969.  Taking full advantage of the fertile musical environment, they produced a distinctive brand of melodic rock, readily apparent on such hits as “Helpless”, “Runaway”, “Lorelei”, “Persephone”, “You Rescue Me”, “Outward Bound”, “Mother Of Pearl”, “Rest In Peace” and “Bad Weather Blues”.  Power and melody have made the Ash a hard act to follow, while they are currently being discovered by new generations of loyal rock fans.

Inspired equally by British folk traditions, American jazz and R&B, the group played to public and critical acclaim.  More than 45 years later, WISHBONE ASH, the quintessential road band, has gained worldwide recognition, based firmly on a regime of relentless touring.

The band includes founding member Andy Powell, who handles lead vocals and trades licks with Yorkshire’s Mark Abrahams. Bassist Bob Skeat, a 20-year veteran of the band, keeps the bottom rocking with Joe Crabtree, one of the best of Britain’s new breed of drummers whose performance credits include Pendragon and David Cross of King Crimson.

With 24 studio releases, 11 live albums and five live DVDs to date, Wishbone Ash continues to prove they are not a band to rest on their laurels.  Wishbone’s third album, “Argus” (1972), was named The Best British Album of the Year by Melody Maker and considered to be one of the all-time classic rock albums, together with “Pilgrimage” (1971) and “New England” (1976). More recently, “The Power of Eternity” (2007), “Elegant Stealth” (2011) and “Blue Horizon” (2014) garnered enthusiastic praise.  The band’s biggest seller, “Live Dates” (1973), is one of the highly rated live albums of the 1970s.  The latest musical project is “Wishbone Ash: The Vintage Years” (Snapper Music), a 32-CD deluxe box set spanning the years 1969 to 1991, featuring a coffee table book, posters, floppy discs, rare photos and more.

The constant of WISHBONE ASH has been ANDY POWELL, voted into the Ten Most Important Guitarists in Rock History (Traffic magazine, 1989) and the Top 20 Guitarists Of All Time (Rolling Stone).  Through the years, he has been featured in notable publications, including Guitar Player, Vintage Guitar and Guitarist, and has appeared at the Guitar Institute in Los Angeles. In 2015, he released his musical memoir, “Eyes Wide Open: True Tales of a Wishbone Ash Warrior” (co-written with Colin Harper, Jawbone Press) which offers an inside track of five decades of life on the road and in the studio.

An award-winning Blues guitarist, singer/songwriter, DAVID GOGO adds heart, soul and grit to the International Blues Scene.  He can swap road stories for as long as you can listen with thirty years of performing and hundreds of thousands of touring miles under his belt.  He has performed on-stage with the legendary Johnny Winter and B.B. King, Albert Collins and Bo Diddley.  He has opened for George Thorogood, ZZ Top, The Tragically Hip, Buddy Guy, Charles Bradley, Robert Cray and Jimmy Vaughan and many others.  An incredible showman with cutthroat wit and virtuosic blues guitar playing, he electrifies the stage with sizzling, hard-rocking blues filled with heavy grooves, grit and emotion.

“Vicksburg Call”, Gogo’s fourteenth release, is poised to add even more acclaim to his already impressive inventory. Undoubtedly a rockin’ blues album, it has more of a “band feel” to it than previous albums, making it feel more like the live show. Additionally, inspiration to make use of a wide range of guitars from his extensive collection had him working outside his usual approach.  Gogo imparts his unique take on Neil Young‘s “The Loner”, Stephen Stills‘ “Jet Set (Sigh)”, and Annie Lennox‘s “Why”, with the help of his great backing band, featuring Bill Hicks on drums and Jay Stevens on bass. “There’s A Hole” features the heartfelt harmonica of The Harpoonist and The Axe Murderer’s Shawn Hall and a Gogo original, “Fooling Myself”, gets an extra boost from Savoy Brown founder Kim Simmonds.  The songs on “Vicksburg Call” connect heartbreaks and joys, love and loss, reconciliation, regret, acceptance and hope for new horizons.

DAVID GOGO’s groove-fueled blend of blues and rock is the basis for a singular and storied music career.  His songs have been featured in film and television and are regularly played on blues radio programs the world over. He has earned numerous Canadian blues accolades, including five JUNO nominations, a Western Canadian Music Award, a CBC Saturday Night Blues Award, and multiple Maple Blues Awards including Guitarist of the Year (2017).

Sponsored by the Campbell River Mirror, What’s On Digest and Coast Discovery Inn, the Tidemark Theatre and Gee Dan Productions proudly present, Wishbone Ash with special guest David Gogo and Band at the Tidemark Theatre on September 23, 2018.   Tickets are $47.50 (+applicable taxes and fees) and can be purchased at the Box Office Tuesday through Thursday between 12pm and 4pm.  Tickets are also available online:  tidemarktheatre.com OR 287.PINK!