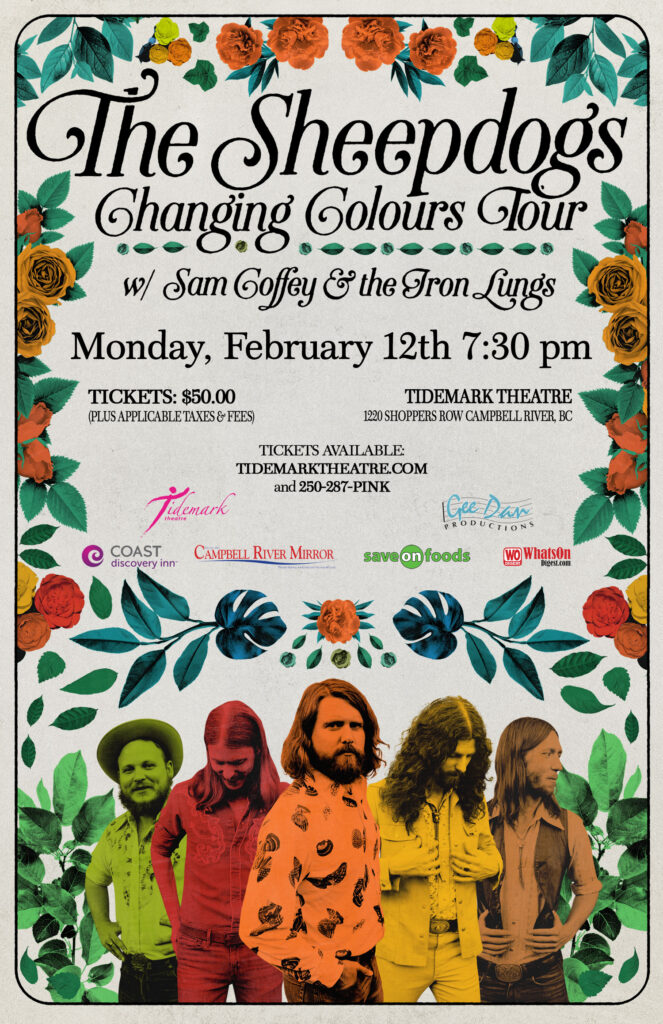 The Tidemark Theatre, in partnership with Gee Dan Productions, is proud to present The Sheepdogs, with special guests, Sam Coffey & The Iron Lungs!

Hailing from Saskatoon, three-time JUNO awarding winning artists THE SHEEPDOGS burst onto the international scene after beating out thousands of artists in 2011 to appear on the cover of Rolling Stone Magazine. Since then, The Sheepdogs have amassed six JUNO nominations, toured worldwide and earned Platinum certification for their 2010 LP Learn and Burn.

The Sheepdogs’ latest self-titled LP produced by Patrick Carney (The Black Keys) debuted at #1 on the Top 200 SoundScan Chart, garnering another GOLD record for the band.

Sam Coffey & The Iron Lungs are a power pop band from Toronto. Formed by Coffey, a former mechanic’s apprentice from Kitchener, Ontario, with it’s members collected from various Ontario small towns, they rapidly ingratiated themselves with Toronto’s punk scene. The band released a stream of DIY singles before signing to Oakland punk/garage rock label Southpaw Records (Ty Segall, Young Guv) for their Gates of Hell LP in 2014, which received praise from outlets like Pitchfork, Spin and Noisey. Touring extensively and playing with bands like Redd Kross, Black Lips, Screaming Females and The FLAMIN’ GROOVIES, Sam Coffey & The Iron Lungs have become regulars in DIY venues up and down the East Coast.