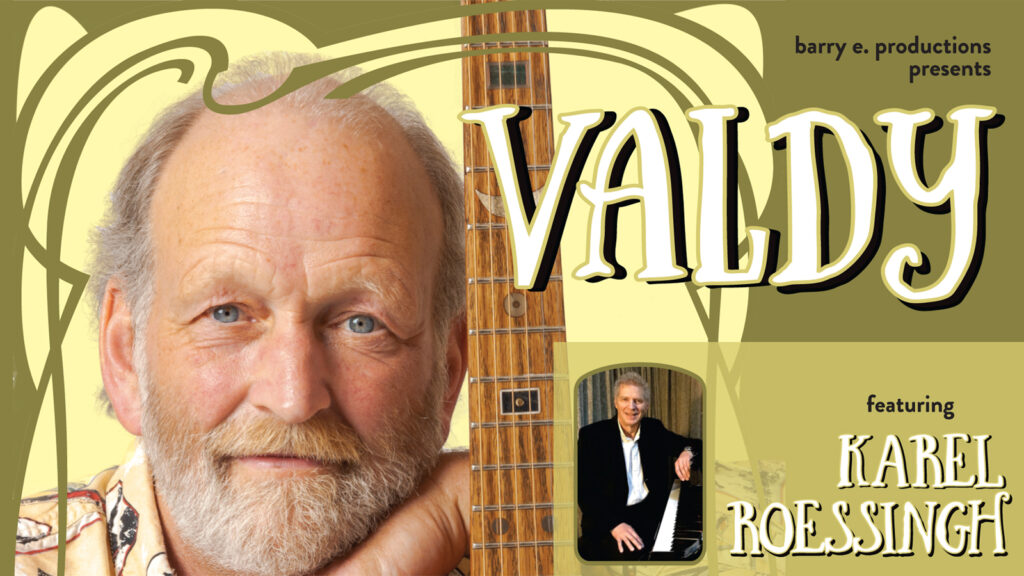 One of Canada’s most beloved performers, Valdy has earned admiration from fans and critics during a career spanning five decades.

“Like a bright ray of sunshine on a cloudy day, Valdy bounces onto the stage and the magic begins”

He began performing as a solo artist, and in 1972 recorded his “Rock and Roll Song” on Haida/A&M; it became a hit. His music was featured in the 1972 Steve McQueen film The Getaway. After that, his career never looked back. Touring has been his life since.

Valdy has toured Canada for forty-six years and plays regularly in New Zealand with Kiwi mate Graham Wardrop. He has also toured Austria, Denmark, Germany, Holland, Spain, Sweden, and Switzerland, and is an oft-invited performer at dozens of music festivals, including the Kerrville Folk Festival in Texas. In 2000 Valdy released the album Contenders with country musician Gary Fjellgaard He continued to tour with Fjellgaard for many years.

“He’s a master of country, folk, rock and blues, and the catch is that whatever the sound, people know that Valdy is sincere.”  ~ Saskatoon Star Phoenix

“Valdy remains one of the country’s purest and most credible storytellers.”  ~ Toronto Star

Karel Roessingh has played throughout the world in almost every imaginable venue. He has led bands for Howie Mandel, Rich Little (and his lesser known brother Fred), Bob Newhart, Shari Lewis (and Lambchop), and Ted Knight, played with Valdy, The Moody Blues, Powder Blues Band, Jann Arden, The Shirelles, and Leslie Gore, and opened for the Temptations (with vocalist April Gislason) and solo for legendary jazz guitarist John Pizzarelli.

Karel is a rare musician. He doesn’t have anything to grumble about… Being versatile is what has made the difference between Roessingh and so many other talented Victoria musicians who have been unable to earn a reasonable living just playing music. He appears to have played in every imaginable situation, and the breadth of that experience shows through at a place like the Herald Street Caffe, where he’s free to play whatever comes to mind. Characteristically, his playing has nice walking basslines and the chord voicings of a player out of the Berklee School of Music in Boston… He’s also fortunate in having zucchini-like fingers that can take 10ths and 11ths with relative ease… Here is a man who has clearly paid his dues, and the success he’s now enjoying in Victoria is well-deserved.”