Harpoonist & The Axe Murderer Bringing Blues-Rock Grooves to the Tidemark 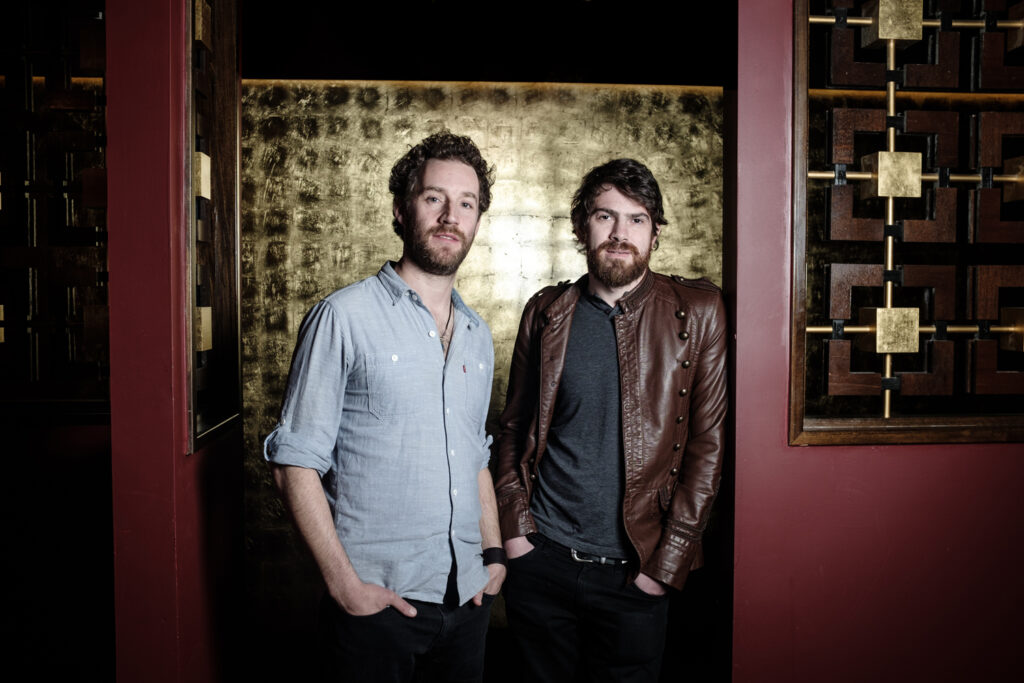 “This duo is making some of the most gritty, raw and muddy music north of Mississippi” – CBC

The Harpoonist & The Axe Murderer are relentless touring artists known for their high-energy, sweaty, dance-floor-boogying performances. Armed with a sack of harmonicas, a mess of foot percussion and a road-worn Telecaster, Shawn Hall (The Harpoonist) and Matthew Rogers (The Axe Murderer) kick out raw and primal blues while electrifying the genre with a lightning bolt of new life. Hall and Rogers limit their sound to whatever they can play between them, using only their mouths, hands and feet. Hall provides soul-tinged vocals and blues harmonica, while Rogers simultaneously lets rip on guitar and foot percussion.

Their influences range from the iconic songwriting of Willie Dixon to the boundary pushing of Jack White and Danger Mouse. But, show organizers say their sound is distinctly their own, smothered in greasy, gritty soul and imbued with funk. Elaborating, promoters call their music “unapologetic. It slaps you in the face and makes you sweat like it’s a sticky, summer night. It cuts you to the core. It’s the blues played the way it was meant to be played.”

Hot off the release of their latest album, The Harpoonist & The Axe Murderer will be bringing the best of ‘Apocalipstick’ to the Tidemark Theatre this November!

“There once was an era when records were made in castles, abandoned airplane hangars, barns, or on a yacht off the coast of the Bahamas, its passengers as high as paper kites. This is not that record! It is an album that came together from the desire for companionship, the endless pursuit of tone, the strength and glue of family, and above all, the love and admiration for each other’s skills. Whether it was operating a tape machine with Jedi precision, creating meals that fueled us, or belting out glass shattering ohs and ahs, it was the elbow grease of many individuals that brought this project to life.” – THE HARPOONIST & THE AXE MURDERER

These days it feels like our world is on the verge of collapse. But it’s with near-end times in the breeze that we plunge deeper into the pleasures of sex, revelry and entertainment. ‘Apocalipstick’ begins with the doom-laden warning call of ‘Get Ready’ (to be released as a UK single). Set to a contrastingly bouncy drumbeat, Shawn Hall alerts us to “Get ready for the hard times / Get ready for the heavy load / Get ready for the who knows what”. “Ben Rogers [guest vocalist] first sang ‘Get Ready’ to us by the piano in the basement of my home,” says Hall. “It was instantly familiar to us and embodied this loose campfire-like group vocal thing, which carried right into the recording sessions. The beauty of this song is the impression of hopefulness it leaves you while layered in a bed of chaos.” With the fate of the world certainly in question, ‘Apocalipstick’ delves into lustful begging with ‘Pretty Please’, summons complete heartbreak in ‘Treat Me Kind’, while ‘Nancy’ and ‘Forever Fool’ touch on themes of bullying and revenge.

‘Apocalipstick’ is the follow up to 2014’s ‘A Real Fine Mess’, which received considerable recognition in their home territory for the Vancouver, Canada based duo of Hall and Rogers. This included a ‘Blues Album of the Year’ Juno nomination (2014) and wins for ‘Blues Album of the Year’ and ‘Alternative Album of the Year’ at the WCMA’s (2015). Their previous release, ‘Checkered Past’, also won them the ‘Blues Act of the Year’ gong at the SiriumXM Indies (2013). They have had songs featured on television shows such as: ‘CSI’, ‘NCIS: New Orleans’, ‘Bitten’, ‘Killjoys’, ‘The Good Wife’, ‘Blue Bloods’ and the aptly named TV movie ‘Lizzie Borden Took An Axe’.

Sponsored by the Campbell River Mirror, What’s On Digest and Coast Discovery Inn, the Tidemark Theatre proudly presents The Harpoonist & The Axe Murderer at the Tidemark Theatre on November 10, 2017.  Tickets are $32 for Members and $37 for Non-Members (+applicable taxes and fees) and can be purchased at the Box Office Tuesday through Thursday between 12pm and 4pm.  Tickets are also available online:  tidemarktheatre.com