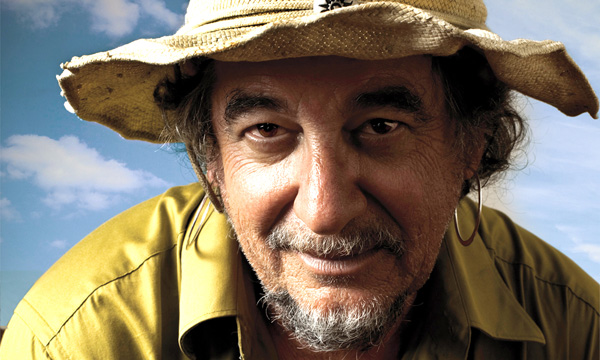 “A wickedly sharp observer of the human condition.” — Rolling Stone

Greg Brown is one of the foremost living folk artists of his generation and his album The Iowa Waltz is widely acknowledged as an early masterpiece and one of the most critically acclaimed titles in his rich discography. Inspired by youthful wanderings on Iowa back roads, the album is a raw, unsentimental yet affectionate journey through the American heartland filled with vivid scenes and memorable characters.

Greg’s youth was spread across a map of the Midwest as they moved between churches (and even denominations), but music was always a staple. Gospel and hymns, classical, hillbilly, early rock and roll, country, and blues coalesced into a simmering stew of sound. Greg studied classical voice and piano as a child and also sang with choirs and in state competitions. At six he took up the pump organ and at twelve he learned the basics of guitar from his mother (who was also an English teacher—so books and poetry were always around the house).

At 18, Greg won a contest to play an opening set for singer Eric Andersen in Iowa City, who then encouraged him to head east. Moving to New York, Greg landed a job at Gerdes Folk City in the Village running hootenannies. Next he tried Portland, Los Angeles and Las Vegas, but after a few years he moved back to Iowa. He recorded a couple of albums on his own (44 & 66 and The Iowa Waltz), then began working on the renowned national radio show A Prairie Home Companion and touring nationally. After Greg teamed up with Bob Feldman in 1983, they re-released Greg’s first two albums under the name Red House Records — the beginning of the now legendary folk/roots label that has released nearly all of Greg’s 27 albums.

With a career now spanning four decades, Greg continues to write, record and perform.  His seasoned songwriting, storytelling, and music are deeply rooted in the land and culture of southeastern Iowa. He moves audiences with warmth, humor, a thundering voice and his unpretentious musical vision.

Sponsored by the Campbell River Mirror, 2Day FM and Coast Discovery Inn, the Tidemark Theatre and Vancouver Island MusicFest proudly present Greg Brown at the Tidemark Theatre on October 9, 2015.   Tickets are $32 plus applicable taxes & fees and can be purchased at the Box Office on Tuesday or Friday between 12pm and 4pm.  Tickets are also available online:  tidemarktheatre.com.