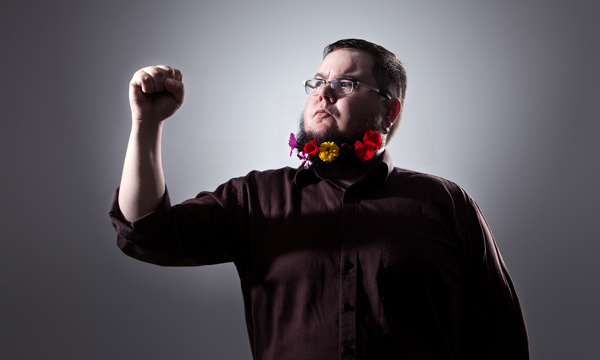 Internationally recognized author and spoken word artist Shane Koyczan has emerged as a creator of poetry that dares to belong to the people and speak directly to them in their own voice. In 2013, he collaborated with animators to make the anti-bullying viral video “To This Day” which has had over 13 million views, and he performed a customized version “For the Bullied and the Beautiful” to acclaim at the 2013 International TED Conference in Long Beach, California. Shane shapes his words and delivers in multi mediums from authored, video, spoken word, operatic, and musically performed.

Recorded with Cayne McKenzie (We Are The City) and Hannah Epperson and mixed by Aidan Knight, Silence Is A Song I Know All The Words To is another chapter in the continuing story of the renowned spoken word artist, poet and author Shane Koyczan. The acclaimed new release is available now along with the companion piece graphic novel of the same name. After a sold out coast to coast Canadian tour in the spring, Shane Koyczan will be back on the road again for a set of very special performances though his home province of British Columbiaincluding engagements in Duncan, Campbell River, Saltspring Island, Mission, Kelowna and Revelstoke.

“When I first heard Shane perform “Shoulders” it brought tears to my eyes,” said David Suzuki. “Poetry, like music, connects people in a powerful way and Shane lifted entire audiences to their feet with his incredible words. We are so grateful that he’s a part of the Blue Dot movement.”

In the fall of 2014, Shane Koyczan’s much lauded novel Stickboy was the subject of both an art exhibit and an opera with the poet himself as Librettist. The visually stunning world premiere of the opera Stickboy was met with unanimous acclaim and ran from October 23 to November 7 at the Vancouver Playhouse.

“Stickboy was a milestone for Vancouver Opera and a huge achievement  for Shane, composer Neil Weisensel, and the entire creative team. Eight thousand people saw the show and leapt to their feet to applaud the artistry. We continue to hear from audience members who were as deeply moved by the production as we were. Kudos to Shane for his accomplishments as poet and librettist, and for generously sharing his story with the world.” – James Wright, General Director, Vancouver Opera.

Sponsored by the Campbell River Mirror, 2Day FM and Coast Discovery Inn, the Tidemark Theatre and Gee Dan Productions proudly present Shane Koyczan at the Tidemark Theatre on October 16, 2015.   Tickets are $28.95 for Members and $33.95 for Non Members (plus applicable taxes & fees) and can be purchased at the Box Office on Tuesday or Friday between 12pm and 4pm.  Tickets are also available online:  tidemarktheatre.com.