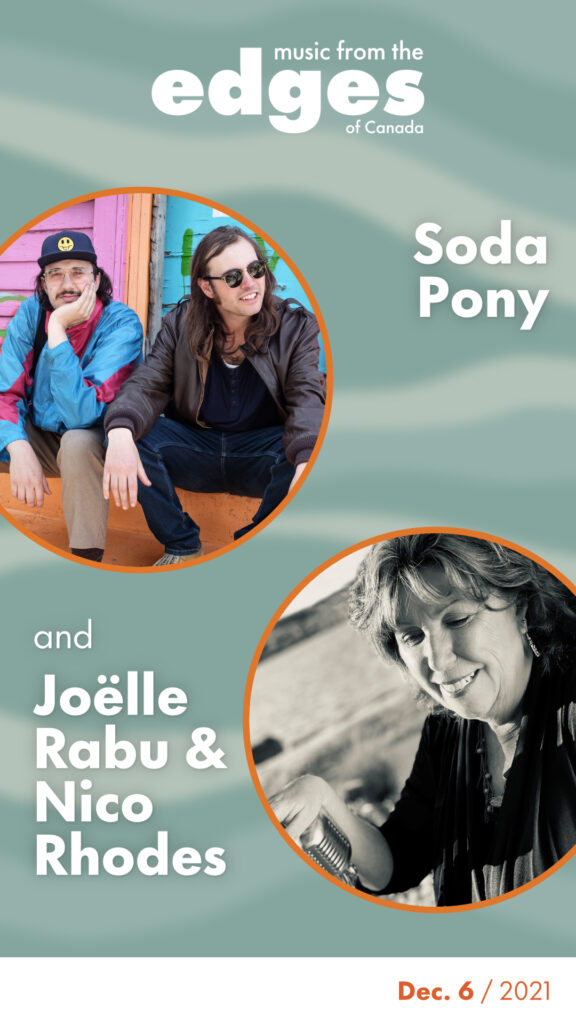 The Tidemark Theatre is excited to present Soda Pony and Joëlle Rabu & Nico Rhodes, in partnership with Music From the Edges of Canada!

Hailing from Whitehorse, Yukon, Soda Pony is made up of local idiots Patrick Hamilton and Aiden Tentrees. In the city where they’re best known as scavengers or employees at the local dump, Soda Pony captures the hearts, minds, and stomachs of anyone who’s ever wondered if it would be better to live on Mars while taping their muffler on to their truck. Fueled by the local drive-through, Soda Pony creates an explosion of sound reminiscent of a sci-fi, trailer-trash version of Simon and Garfunkel, sharing vocal leads that blend the earnest and the irreverent. Together they have been messing around with music in a scrap pile of genres for more than a decade, which evolved into the formation of Soda Pony in 2013.

Joëlle is two-time Jessie Award winner and Juno nominee; has recorded 6 albums; toured throughout 5 continents and won numerous accolades for her torch singing style and International charm. She sings in several languages; has starred in numerous theatre productions; performed for royalty; and has made several guest appearances with major symphony orchestras across Canada and the USA.

Nico has not stopped working since his first professional theatre show at the age of 17. As an accomplished musician, composer, and arranger, he has conducted more than 40 professional musical theatre productions across Canada. He has received nominations for Ovation, Jessie and SAT award for music direction and is the recipient of Nanaimo’s 2018 Emerging Cultural Leader Award.